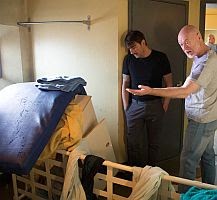 Don't forget, Canadian fans, Corrie airs three episodes on both Monday and Tueseday next week for another catchup. We'll only be one week behind the UK by the end of next week!

Neil's antics push Andrea goes over the edge. Literally. Peter pays the price. The truth about Jim comes out. Steve washes his hands, Jim blackmails Liz. Eccles is saved from Tracy's wrath. Maddie gets a job at Underworld. Michael discovers his past and is afraid for his future. Mary feels threatened. Kevin returns.


For more details and photos, visit the Moosejaw Mercury at Corrie.net