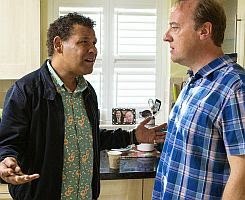 Now then. I started to jot down a few things I wanted to write about and it turned out to be a bit of an epic. I wanted to make a few comments on some of the current storylines and characters that I'm enjoying (or not).  Once I got started, it was difficult to stop. One thing kept leading to another.

Kevin's return has me wondering about Tyrone's ownership of the garage and any profit sharing that might be available. Sophie and Maddie are a bit of a non-starter at the moment but there's one aspect of Maddie's character that I have noticed and hope they keep alive. I'm enjoying Gail and Michael and I really hope this fella stays around for awhile. Aside from the unfortunate way they met, he doesn't have disaster written all over him. Yet.

Are we seeing the return of Scary Mary? You can't blame her in one way, for feeling threatened by the possibility of Julie in Dev's life. Where's the situation with Jason, Tyrone and Fiz going to end? It's anyone's guess at this point.


Read more detail on State of the Street.