(This post was originally posted by Martin Leay on the Coronation Street Blog in September 2014.)

I should declare an interest. My day job is in politics and it is with this hat on that I have recently returned from Labour Party Conference in Manchester.

But it is in my capacity as a Coronation Street Blogger, comrades, that I am filing this report - because, in between various fringe meetings and receptions - I managed to squeeze in some pretty exciting Corrie-related activities.

At conference, the days can be long and the nights even longer. It is important, therefore, to eat well and that is exactly how I started things off on Sunday evening with tea at Annies. I went for the fish pie washed down by a couple of bottles of Becks. It was excellent! My mate James opted for burger and chips – also excellent. 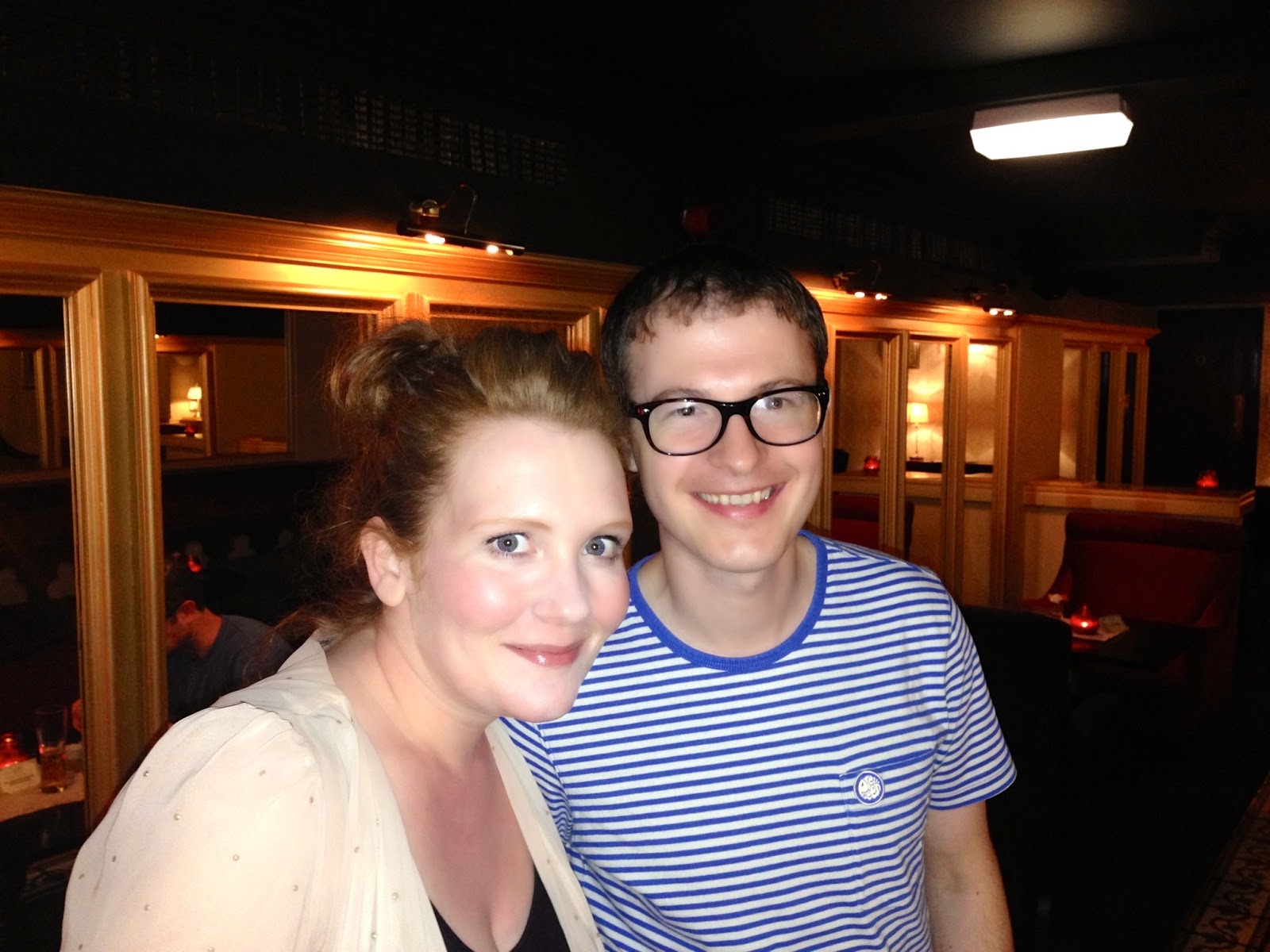 It was lovely to see Jennie McAlpine and her partner Chris again (I covered our first meeting here and here). Eight weeks away from the birth of their first baby, they are both positively glowing. I have enjoyed the recent argy-bargy between Tyrone/Fiz and the Grimshaws. Jennie will be going on maternity leave soon but not before the hilarity that will surely ensue with Cilla’s imminent return. This will almost certainly sow the seeds of Fiz’s temporary exit. I’ll tell you something I am certain of - next time I visit Annies, I’m going for the hotpot! On Tuesday, I was out on the doorsteps… of Coronation Street. I visited the set at Media City in Salford Quays where a group of us (including two Lords and a Baroness) were escorted across the cobbles by the production team. It was in equal parts surreal and magical. The transformation from what was derelict brownfield land to the impressive site that now stands at Media City is nothing short of spectacular.

We had a guided tour from Stuart Blackburn (Producer), Kieran Roberts (Executive Producer), John Whiston (Creative Director of Corrie and Emmerdale) and Robbie Sanderson (Head of Production). It was really good of them to give us so much time and fascinating to discover the differences between the current set and the old set on Atherton Street that I visited in July.

I saw a prop for a forthcoming storyline but am sworn to secrecy so this is a spoiler free zone, I’m afraid. I can however reveal some titbits of technical trivia. Next time you’re watching, listen out for seagulls. They can sometimes be heard cooing away because Media City is on the banks of the Manchester Ship Canal, near the River Irwell. In the final weeks of filming at the old set, seagull noises were dubbed over Corrie so that they wouldn’t seem out of place on screen once the move had been completed. 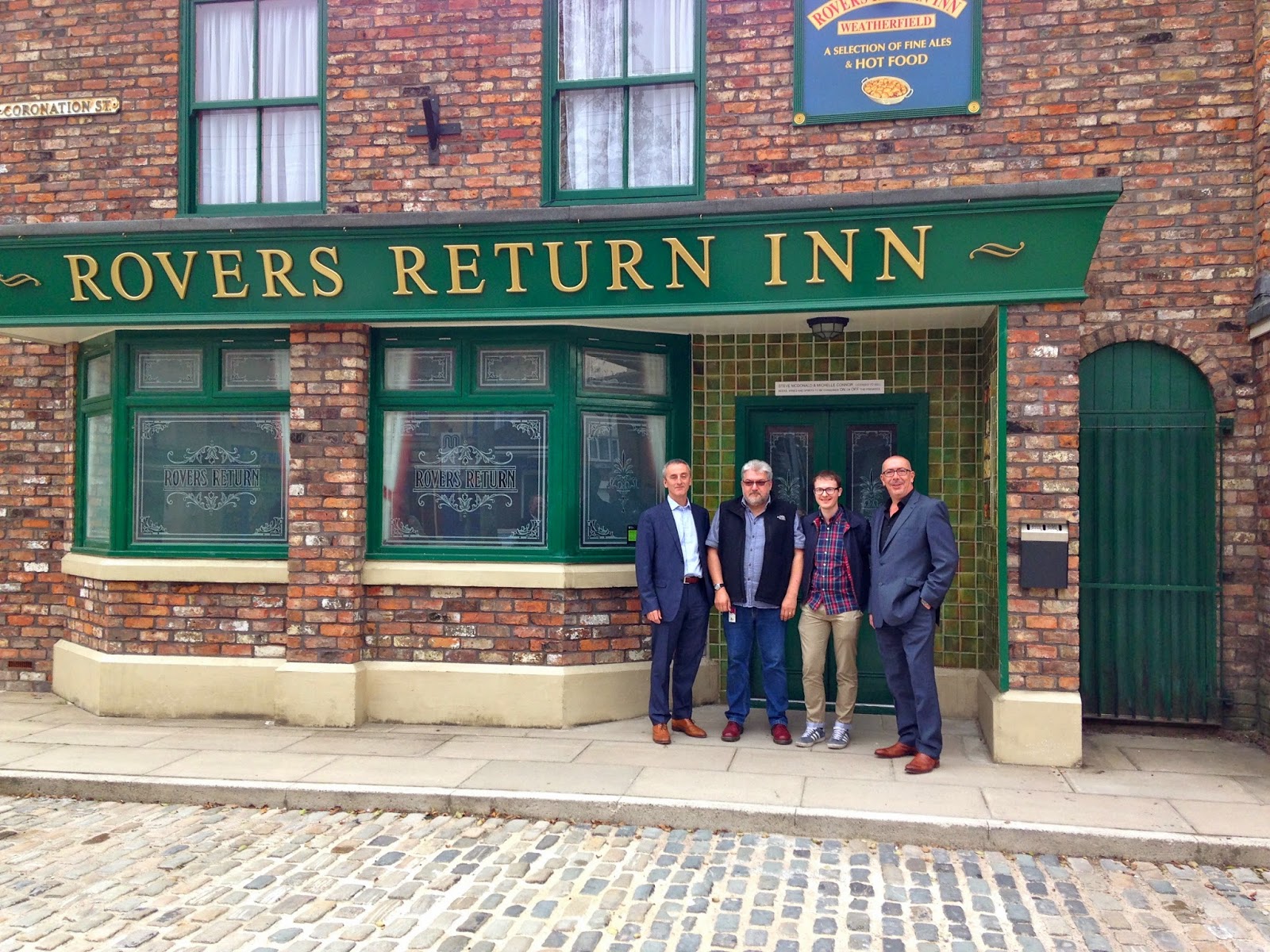 Much has already been said about the larger scale of the new set and that is certainly noticeable. The inside of the Rovers is bigger and as we know, there is an extra window (top floor, right hand side). This makes it more realistic for the Rovers to have at least three or four bedrooms upstairs. Only one bedroom set tends to be used in the Rovers – that of Steve and Michelle.

The street is twice as wide which means that normal sized cars can now go up and down it, passing each other. Stuart Blackburn pointed out that they could now get a bus down Coronation Street, which means that a bus crash would be possible at some point!

The bigger space needs to be filled and, as a result, more characters now have cars… and vans. Think of Michael Rodwell with his ice cream van, Steve and Michelle with their campervan and Tim with the “Flush And Go!” banger used for his window cleaning business. Vehicles of this size could never have fitted onto the old cobbles. Kieran Roberts spoke of the “pleasant challenge” created by the extra space and the consequential need for “extra dressing”.

Corrie’s producers have been subtle when introducing these details, doing it bit by bit so that sudden changes have not looked incongruous. Slowly and surely, the idea is to inject an added layer of realism. It’s a good job Kevin’s back to help out at the garage when all these new motors need servicing!

It is now also possible for delivery vans to appear on screen, perhaps dropping off ingredients to the Bistro (not olives – Gail still has that covered). This is something you would see on a normal street with shops and will start to crop up in Corrie from time to time to provide a better reflection of real life. 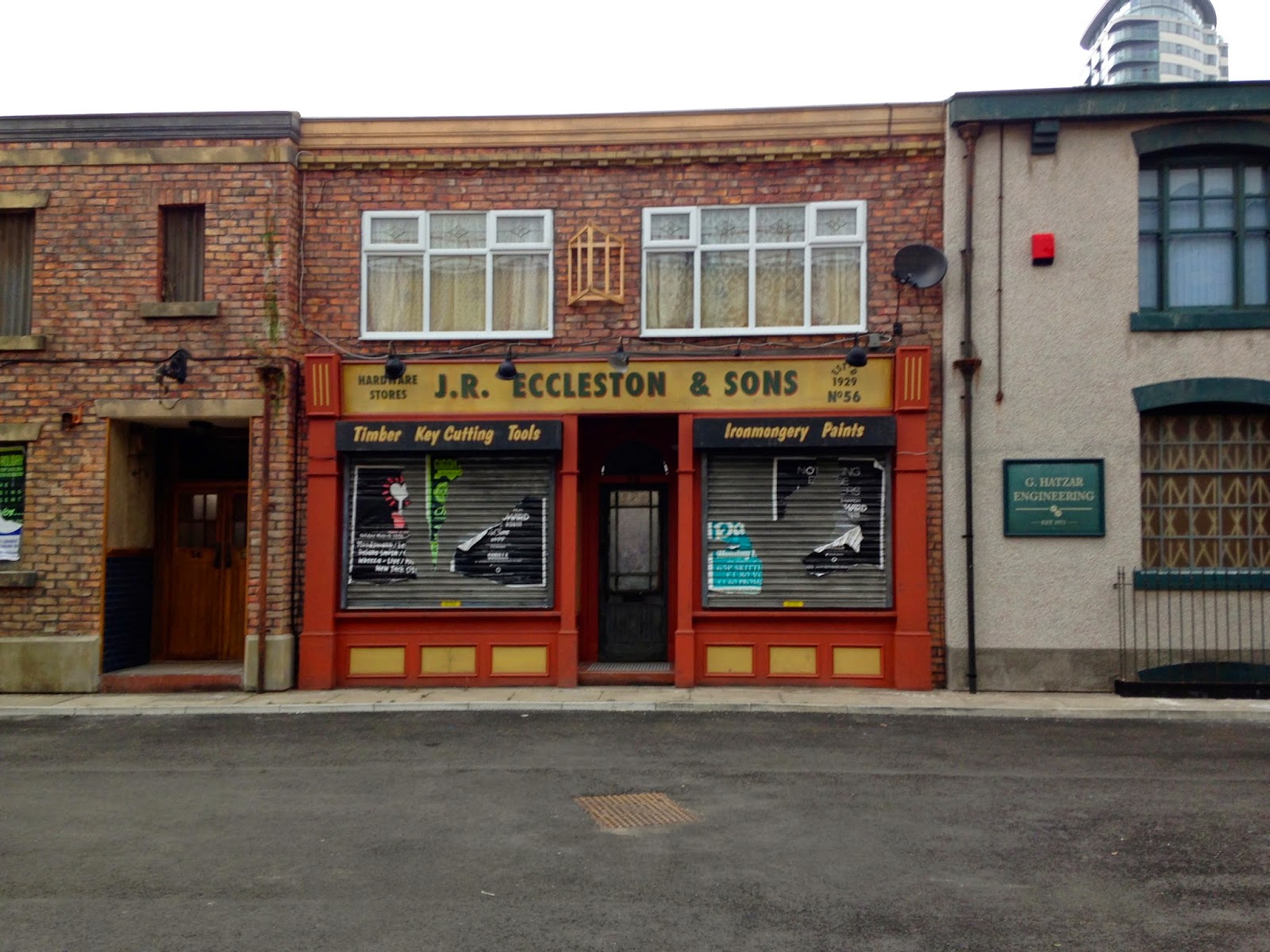 There are also more background outlets. I was surprised to discover that Weatherfield has a hardware store – J.R. Eccelston & Sons, located where Rosamund Street continues into Maudsley Street. This could be utilised in future, perhaps providing a trade for one of the new characters in the increasingly mixed local economy.

Robbie Sanderson talked us through the production process. There are far more sets on site now. There are around 24 standing sets every week but a rotation of approximately 34 sets in total – so some of them are kept flat-packed off site, depending on storylines.

The factory is big enough for Underworld scenes to be shot inside the building, which has freed up studio space. They now have 4 studios and 2 galleries, which can be pointed towards any studio so that the crew can monitor filming as it takes place. By the end of this month, there will be a studio at the top of the salon that runs the entire length of the outside area. This means that Stuart and Robbie will be able to see what is being shot on the street in real time and can start cutting it just as they could on the studio floor. Stuart joked that this will make it easier for him to interfere with what is happening on set. 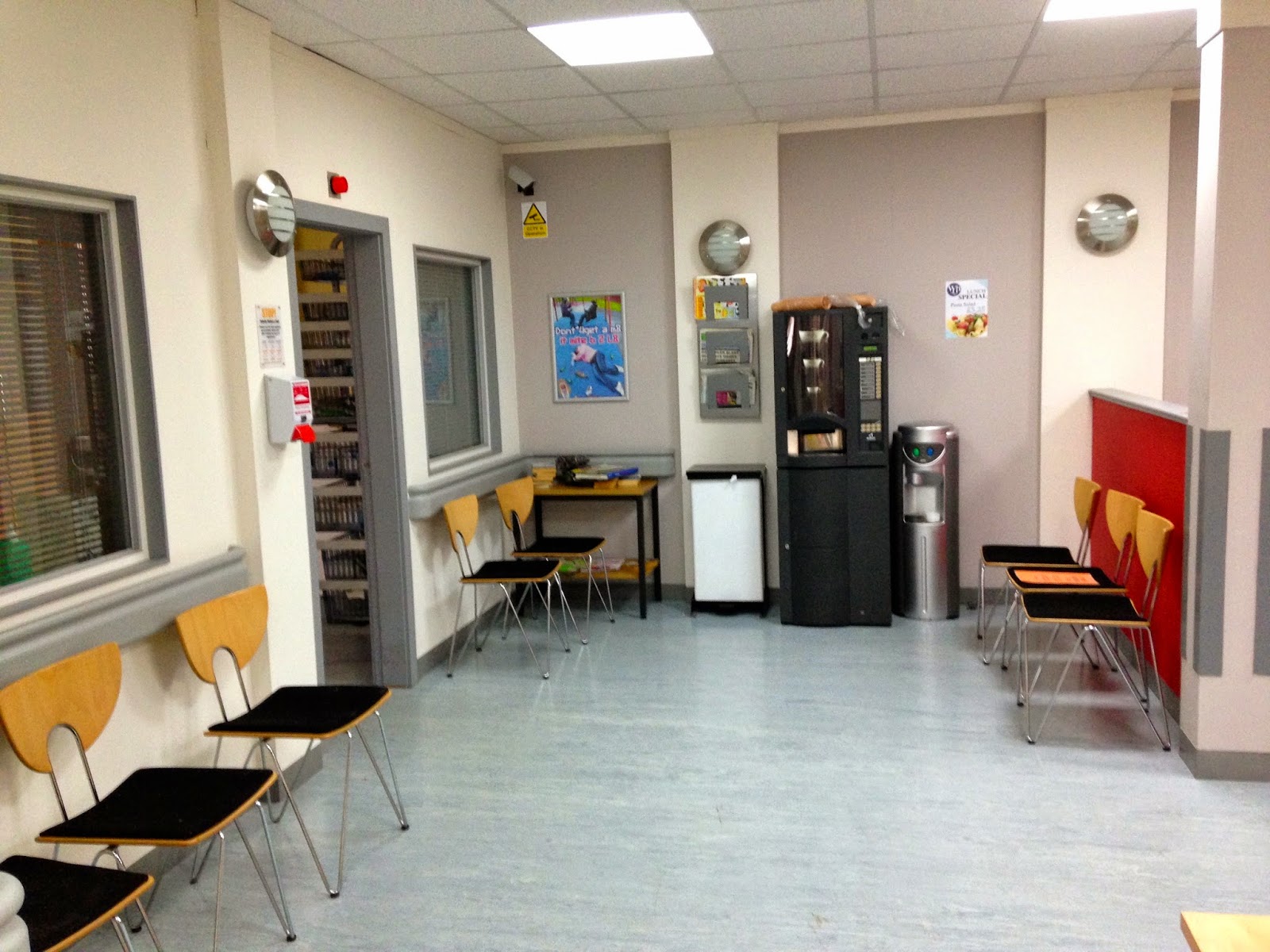 The space is used extremely efficiently. The area inside Rosamund Street Medical Centre, for example, was recently used to film Peter’s hospital scenes and as the prison visiting room. And the area above Roy's Rolls has been used for some of the other prison scenes while the space above the Rovers has served as the police interview room, where no doubt Rob will be before too long.

You can now cross the thresholds of the houses that are on set. Previously, there would be a third of a house and then there was nothing but a wall. All of the interior sets of the houses are in the studios, still, but it is now possible to walk right through to the kitchens, which go on to the back ginnel.

Talking of the ginnel, I was pleased to establish that its architectural integrity remains in tact. The bricks were painstakingly replicated and yoghurt was used to make the moss grow in the right way. 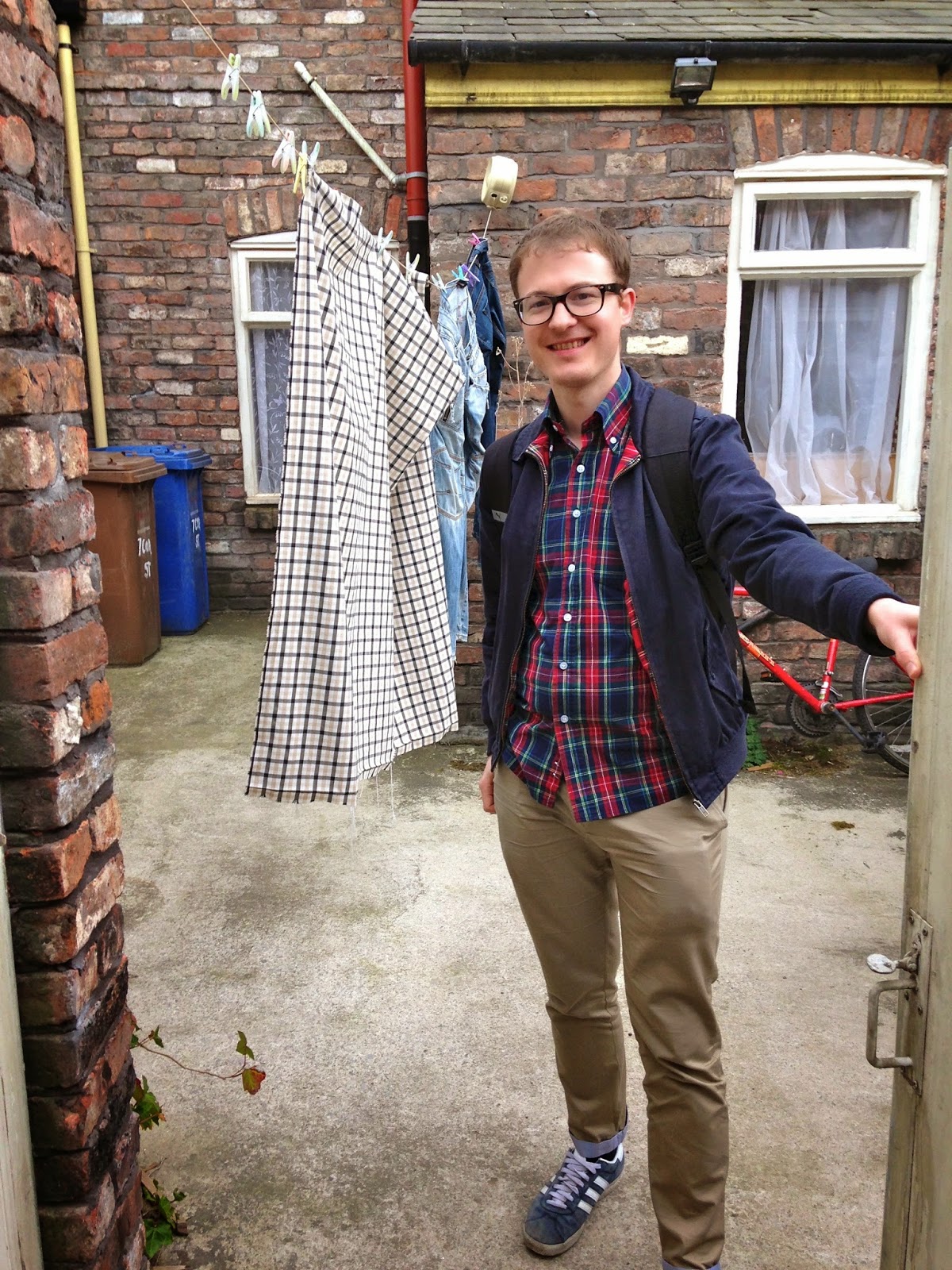 While I was in the ginnel, I popped into Fiz and Tyrone’s back yard where they had washing drying on the line.

It was absolutely brilliant to see the new Corrie set and to learn from those directly responsible for putting Coronation Street together exactly how things have changed since the move.

I didn’t think I’d be able to top this but later I attended the Daily Mirror’s Street Party at the old set on Atherton Street. Sadly I missed Sally, Sean and Curly but I did say hello to Ian Puleston-Davies (Owen), Joe Duttine (Tim) and Cherylee Houston (Izzy), all of whom were lovely. 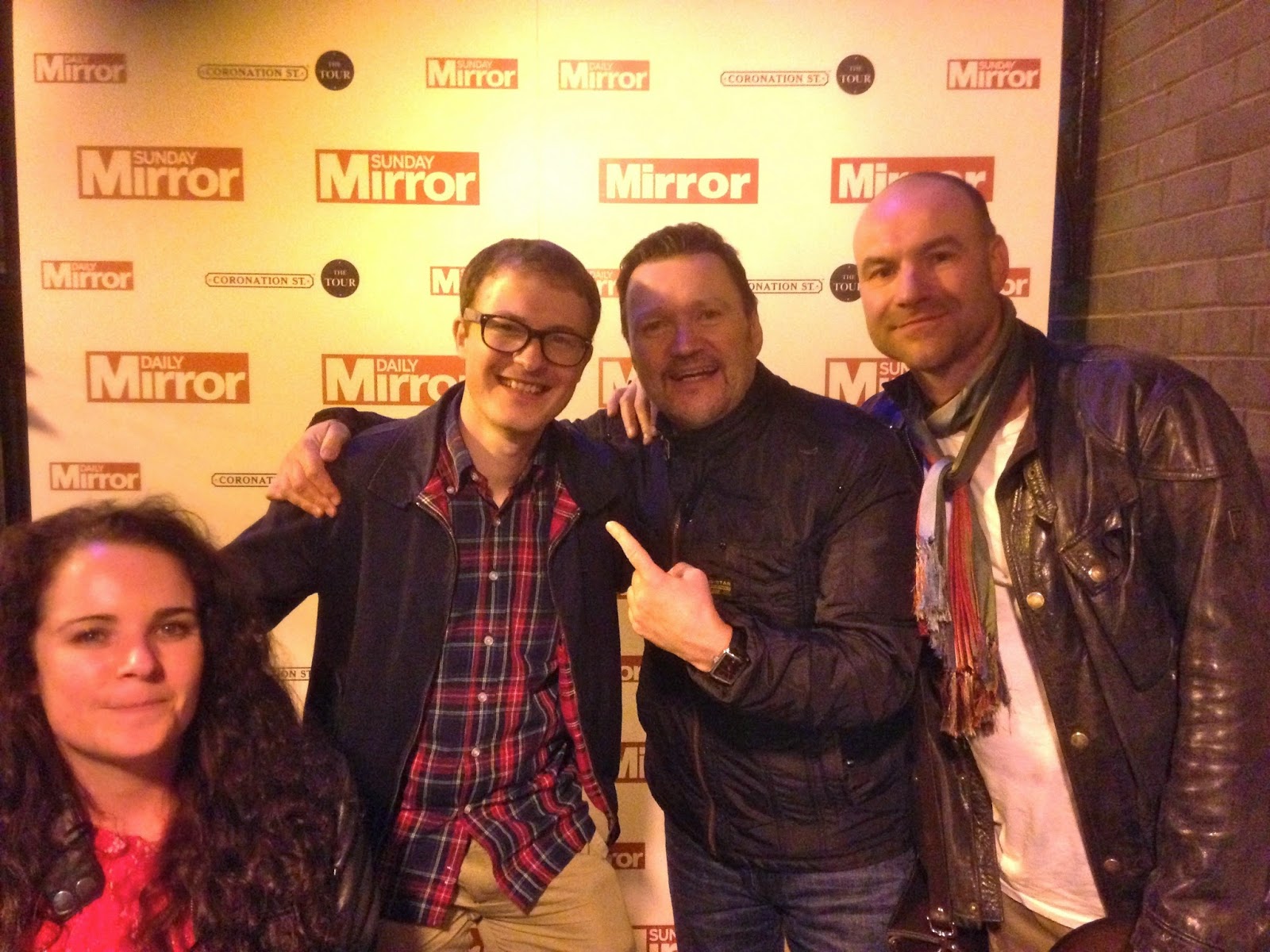 I’m a big fan of Tim in Corrie and it was an honour to drink a beer with Joe Duttine before I joined some other movers and shakers on the dance floor. I’d like to see a lot more of Tim on screen and it will be interesting to see how the plot develops between him and Sally now that Kevin is back.

It really was a 24 Hour Party Conference this year, so I’m going to catch up on some much needed sleep. But only once I’ve caught up on Corrie, of course.