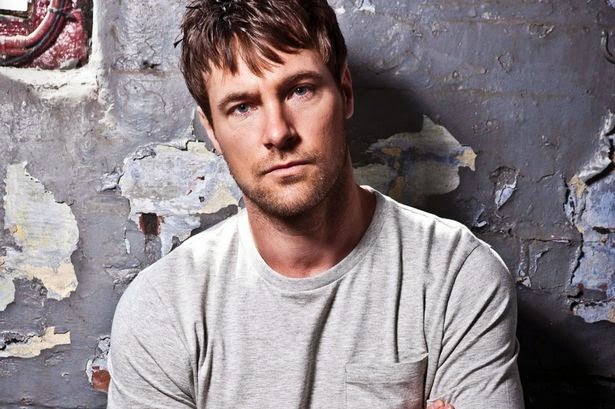 (This post was originally posted by Martin Leay on the Coronation Street Blog in October 2014.)

Roll up! Roll up! Read all about it – “Boozy Bookie Bludgeoned Barmaid”. That’s how I imagine the front-page headline of today’s Weatherfield Gazette will read now that Rob has literally got away with murder.

On the morning after being named “Best Bad Boy” at the Inside Soap Awards – and just a few days after filming his final scenes as Rob Donovan – I caught up with Marc Baylis at ITV HQ in London. Marc was in fine form as he looked forward to an exciting crescendo for the character of Rob.
Before the trial, Rob was “pretty sure he’d got away with it”, says Marc. He felt more confident “with some of the evidence given against Peter”. Even so, when the verdict was announced at Weatherfield Crown Court last night, Rob looked almost as shocked as Peter.

Going through the details of Tina’s death in court threw Rob “off kilter” and the resurfacing guilt resulted in him letting “a couple of hints” out of the bag. Rob’s failure to share Carla’s doubts about Peter’s guilt and his insistence to Simon that Peter did not kill Tina have set alarm bells ringing - especially now that Carla knows about Rob’s little pep talk with Simon. 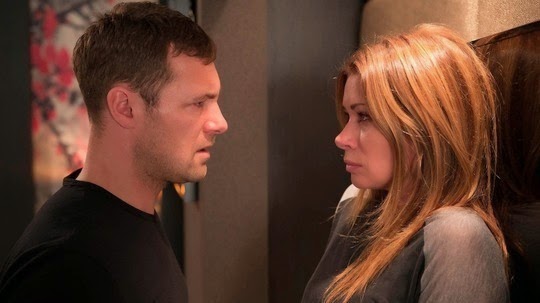 Erratic behaviour such as this will ultimately be Donovan’s downfall. Carla is convinced that Peter is innocent and next week Rob will confess to his sister - “They’ve been through so much together that he doesn’t have to say it, she just knows”. Essentially, Rob “just can’t lie to her anymore”, Marc says. What we do not know is what Carla will do with this information and whether or not she will stand by him and let Peter rot in jail.

Rob hopes that Carla’s family loyalty will outweigh any feelings she once had for Peter and Marc notes that Rob “has brainwashed himself throughout the whole event and he’s trying to brainwash her as well”.

Tracy’s hen do, Rob’s stag do and the wedding will all take place next week. It won’t be a wild one for Rob, who Marc explains is “trying to be angelic”.  Instead of going out with the lads, he will have a few drinks with his ‘best woman’ Carla and Michelle because Rob “wants the whole wedding day to be absolutely magical”. Perhaps his secret will be exposed at this point, which would leave Carla contemplating an interesting dilemma on the day of the wedding.

It is somewhat curious that despite Rob’s murderous ways, there is still a likeability factor about him. When Rob was revealed to be Tina’s murderer, Marc says the reaction from fans was “the polar opposite” of what he expected – “for some reason it has made people like Rob more.”

Rob Donovan is not the archetypal soap villain. One of the most interesting aspects of his character is that he does feel guilty for what he has done. Rob tried to stay away from court in order to “carry on his denial” but was hoodwinked into attending the trial in a show of loyalty towards the Barlow family. This led to “all the guilt layering up within Rob again” and explains his recent slip-ups.

Rob has redeeming qualities in his obvious love for both his sister and his fiancée. Marc regards this loyalty as key to Rob and feels “that’s why the storyline is working”. “We’ve tried to be as delicate as we possibly can. I’ve stated a lot to people that we don’t need too many shots of Rob being dastardly in the background… and not too many guilty looks.” “I kind of wanted to keep it away from being too much of a soap villain”, he continues, and instead show “as much of a real person as possible going through that situation”. 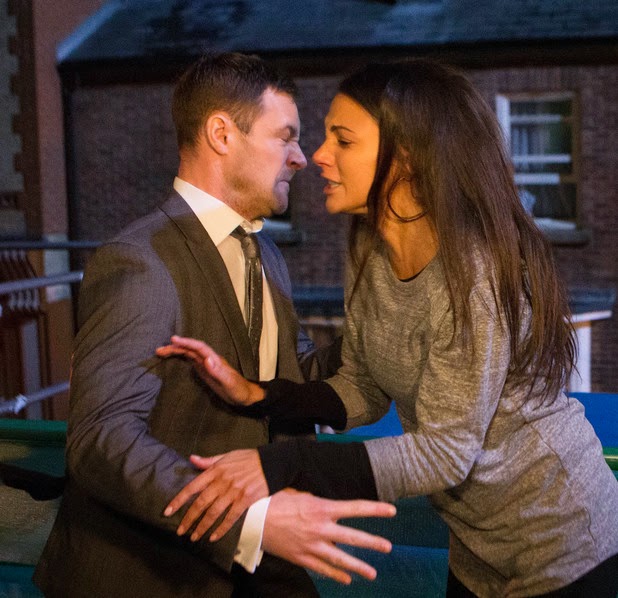 I was intrigued to know at what point Marc discovered that Rob was to be Tina’s murderer. Marc recalls there was a month after “Michelle (Keegan) found out that Tina was going to be killed off until I found out that Rob was the murderer”. He laughs that everyone was walking around work going ‘I hope it’s not me’. “It was a dramatic month”, he says – “more dramatic than the actual material on air!”

As soon as the murder storyline came up, Marc “knew that there was a timeline” which he believes has been “timed to perfection”.  He has had “a brilliant two and a half years” and although he would have liked to have stayed on for longer, he is “very happy to be going” because of the strength of the material that leads to Rob’s exit.

Marc feels “really lucky to have had this storyline”. He is clearly philosophical about the end of his time at Coronation Street and immensely proud of what he has achieved. He describes the scripts he has been given during Rob’s exit storyline as “by far the best material that I’ve had since being on the show”.

He is quick to praise Michelle Keegan for her portrayal of Tina and express his pride at being involved in the departure of such a massive character. He considers this a “compliment”, noting that as an actor “you want to be there with good material”. 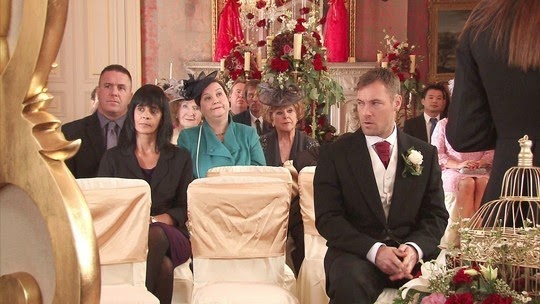 Next week Rob and Tracy are due to have their fairytale wedding. Marc talks about “the romantic picturesque life that is being drawn up” for Rob and Tracy but can’t reveal whether or not they will actually tie the knot. Being soap land, “it doesn’t necessarily go to plan”. Peter Barlow can definitely be struck off the guest list, though – that we do know.

Rob really does want to marry Tracy – “as far as they are both concerned they are meant to be together”, says Marc, “so it’s exterior events that take over”.

The wedding venue is “the most beautiful location that you will ever see and it’s them always punching above their weight”. What I really want to know though is whether the harpist has been booked and whether “Firestarter” will be performed! 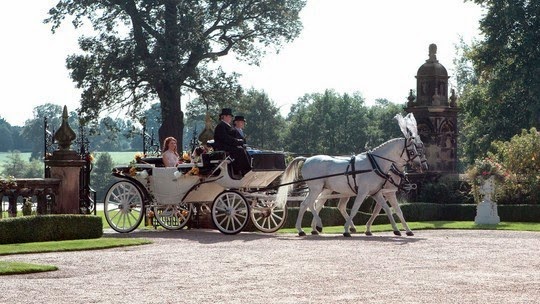 The wedding was filmed at Capesthorne Hall in Cheshire, which is where Simon Gregson’s wedding reception was held in real life. “It’s just absolutely stunning,” says Marc and he enthusiastically describes the huge lakes and lawns and the horse and carriage that have already been revealed in the publicity shots. 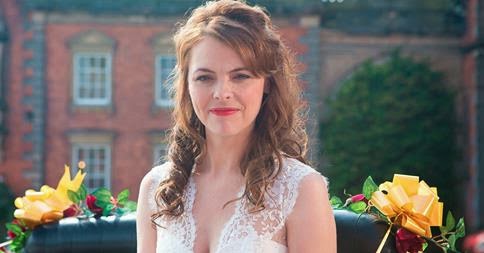 The outfits at the wedding will be traditional. Kate’s dress is white and “absolutely stunning” while Rob has “gone for the long tails”. It is difficult to see how there can be a happy ending but whatever happens in the next couple of weeks, Marc likes to think that Tracy loves Rob so much that she would wait for him.

Marc feels that Rob getting together with Tracy marked a turning point that saw Rob “really become accepted on The Street”. He is very honest in saying that before Rob and Tracy were put together, “it felt like we didn’t quite know what to do with Rob”. However, “as soon as they got together, it just worked”. I agree that Rob and Tracy are extremely well matched and I’ve enjoyed the dynamic between them. It is shame to break that up. Tracy has actually become almost likeable as a result. Almost.

Stuart Blackburn has stated that he would like Rob to return at some point.  According to Marc “the future is a blank canvas” and he is definitely not against coming back “if it’s right for everyone”. In the more immediate future, he is appearing in pantomime as The Prince in “Sleeping Beauty” in Bromley. There can’t be many soap murderers who are cast as anything other than the panto villain. This is testament to that likeability factor I was talking about. 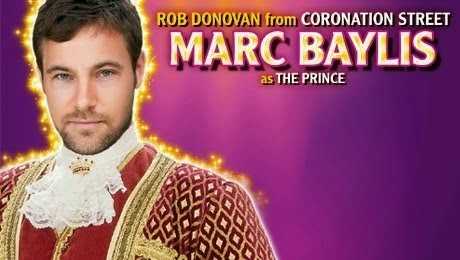 Other than that, he is “happy to go where the wind blows”. “It’s a really weird change”, concedes Marc who compares his newfound freedom to “moving out of home” or the feeling he’s “just finished university”.

Marc has invested in his own camera and microphone and for his leaving present, his Corrie colleagues clubbed together to buy him a lighting rig. As a result, he will now be able to “put tapes together and send those out”.

He would love to do an American drama and was considering going to the States in the New Year for pilot season. However, he will stay in the UK and see what opportunities arise here. He’ll certainly be able to get down to Villa Park more often and is looking forward to watching Coronation Street as a viewer again. 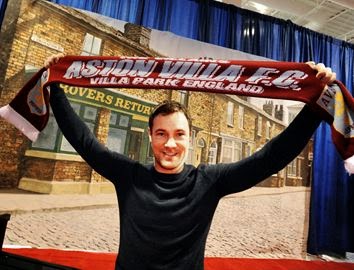 Emotionally, it must have been difficult playing the part of Rob in recent months. Marc says he has “never had to work so hard” but it has “been made easier by the material”. He was worried about burning out but thankfully made it through unscathed.

Rob’s final scenes were shot at nighttime, which makes me think he might do a moonlight flit. Marc recalls that “it wasn’t the easiest of shoots” with the elements against them. But cast and crew were determined to “get the work right, through to the end” so that Rob’s final scenes bring the storyline to a powerful conclusion.

The whole way through, I’ve been considering whether Rob Donovan is an evil murderer or just an ordinary guy who found himself in a difficult situation and made a bad decision. I think the latter but I am curious to know how far Rob would have gone to protect himself. Would he, for example, have sold Carla or Tracy down the river if either of them had been prime suspect for Tina’s murder?

“Absolutely not”, says Marc emphatically. “The whole concept of this storyline and Rob and Carla’s relationship is about the truth and the loyalty and there is a lot to do with family values and morals”. It seems strange to think of a murderer as having morals but Marc believes he would apply the same principles to Tracy.

Rob Donovan arrived in Weatherfield, just over two years ago, an ex-con determined to build bridges with his estranged sister and turn his life around. He found love, remarkably, with Tracy Barlow and when Tina threatened to ruin all of that, he snapped. It is hard to predict how anyone will react if they fear that what they love most is about to be ripped away from them.

Will Rob pay the price for his crime? One way or another, I am sure that he will. And I hope Peter’s conviction will be overturned. Rob has become a very strong character and he will be missed.

It has been reported that Rob’s exit will be screened on Bonfire Night with explosive fireworks guaranteed. I suspect therefore that Corrie fans will remember this fifth of November for some time to come.