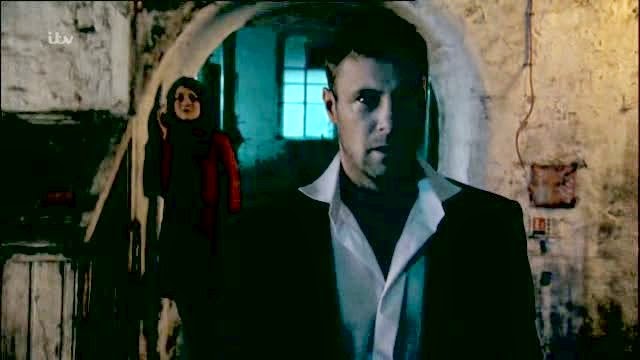 Can't blame Tracy for being depressed. Her future has just crashed and burned and the love of her life turned out to be a killer! She's glad Peter will get out but geez, man, what about me? And if my dad had been spitting out useless platitudes about time healing and at least the truth came out before the wedding, I'd bite his head off, too. It's not really what you want to hear just now is it?

Ken is nearly giddy with joy that Peter might get out and can't thank Carla enough. Carla doesn't really want to know, she might not want Peter to rot in prison but she is still not all warm and fuzzy about Peter either. It was a "damned if you do and damned if you don't" decision. And it has to be frustrating for Peter who can nearly smell the fresh air but has to put up with bureaucracy and he thinks Carla will have him back. Boy is he going to get a shock.

Rob is on the run and calling Tracy to bring him money. She makes him admit the truth and he does. He deserves every sob and every dollop of guilt she can lay on him. His tears might be genuine but it's a bit too late. Can he win her over? But the cops are watching every move she makes. He also finds his picture in the newspaper in the centre of it. I'm very surprised it wasn't on the front page! It was the local Weatherfield Gazette after all. He heard someone pounding on the door. Obviously thought it was the police but it was even worse, it was Tracy. I hope he checked that she didn't have a blunt object in her hand before he opened the door. How did she know the address anyway? He only told her generally where he was.

Tracy seemed more pissed that Rob did it for Carla. Tracy has no sense of family loyalty really. She even admitted she'd have married him even knowing the truth. I thought he was going to beg her to go with him but it was her that asked. She's willing to go on the run, hiding from the law, giving up Amy for Rob. Can she do it? Well, she spent the day cuddling Amy, thinking she'd never see her again and Ken could tell there was something not quite right with Tracy when she left "for the shop".

Ken and Carla figured it out but Tracy was well away, meeting Rob in an abandoned building from the look of it. I wondered if Carla was going to turn Tracy in but not knowing where they were, it's difficult. In the end Tracy couldn't go through with it. She couldn't leave Amy. Oh and it turned out she called the police herself! I kind of had a feeling that would happen but I wasn't sure.

Peter's coming home on Monday. A bit surprised that the solicitor and the legal system would be working that late on a Friday night but hey. It's all good. After what she's been through, understandably, Tracy's really upset, and I figure all that heartbreak and anger is going to turn her into Toxic Tracy with a vengeance. Literally. Carla is going to be her target because Tracy has to blame someone and she's not going to blame Rob. 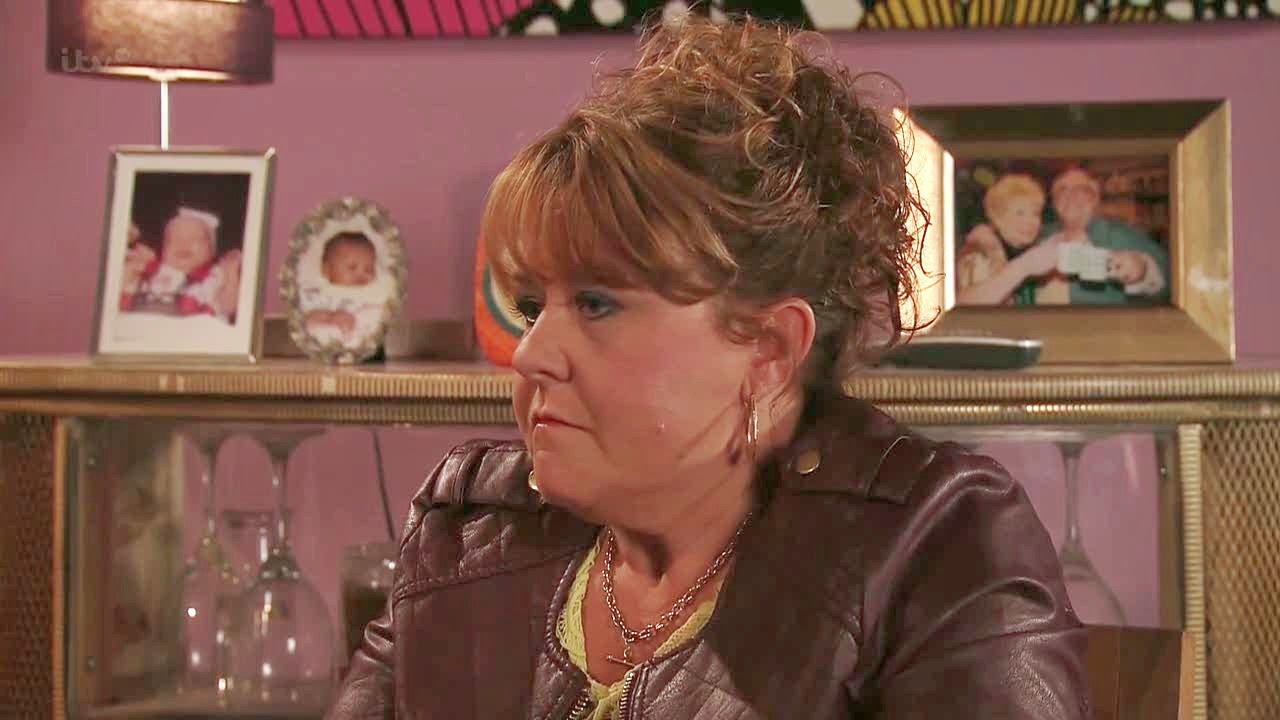 Chesney is still avoiding Cilla when possible and you can tell he's holding a lot of resentment towards her. She's really on her best behaviour and it scares me! Ironing, cooking though she did manage to wangle Tyrone into buying the groceries. She's too proud to accept any help and ended up topping the potatoes on the floor. That, at least, elicited a bit of sympathy from Chesney. Now they're going to squeeze Cilla into Number 5 for a visit instead of squeezing her into Number 9. The poor woman has osteoporosis. Sleeping on sofas isn't going to do her any good.

Faye has volunteered Tim to help out at a school auction but the more he heard about it, the more he realized he couldn't handle the responsibilities but Anna spotted something wrong and badgered him into revealing his secret. Now she's going to be the one that teaches him to read but it has to be a secret (except she did tell Owen) and already Sally's seen Tim and Anna hug so you can see where this is going.

Oh wow, there's Lloyd and Andrea, They've been unseen and unheard for weeks. I see Nick has resurfaced, too. Beth is definitely on Team Tracy but then she's not been on the blunt end of Tracy's schemes nor the sharp end of her tongue all these years, either. Ken has a new BFF, too, in Audrey who has to take up the slack that Deirdre left. Everyone's taking a first aid course. The guy that's running it has caught more than a few eyes of the women. Not such a boring evening, after all! Katy in particular was making eyes at him non stop and I think even Yasmeen was a bit taken in by his smile, too! Katy wasted no time moving in, questions, right? He didn't mind and asked her for a drink so they could talk. Now she wants to be a paramedic. I hope they show her

It's Liz's birthday and Tony's given her a very x-rated card from the sounds of it. She's worried he's going to get done for stolen goods. Nobody should trust Tracy but he's confident. Still, he overhears Tracy talking to Rob and manages to get her to reassure him that he's off the hook.

Audrey is still chasing after Luke and now she's offering his services to Maria for advice on buying a new car and poor Andrea has had the brunt of her going on and on about it, a captive audience. She wasn't going to take him up on the offer but she changed her mind because the car she wants to look at is out in Cheshire and she needs a ride. And the amount of times each of them assured the car seller that they weren't boyfriend and girlfriend virtually guarantees that they will be before long. 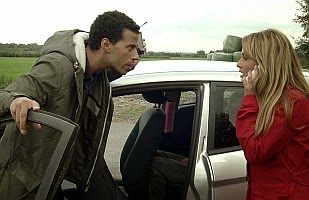 It didn't go very well, though, the car seller got ill, all wobbly and out of it. I guessed it right, he was having a hypoglycemic thingy, what happens when you're diabetic and your sugars get out of whack. And then Luke had to piggy back Maria for a few miles to get back to the car. Really? She couldn't walk it? She wasn't even wearing heels, she was wearing Ugg boots for heavens sake! And I bet she didn't buy the car off the guy after all that. All because the guy had the car keys in his pocket when he went in the ambulance. That man didn't have the presence of mind to get out of the back seat, take the keys from the ignition before they took him away, either. Really not funny at all. Later, Luke made the effort to apologize and suggest a fresh start, turned on the charm and you can see it's making inroads.

Michael is still looking for his son, Gavin and finally, might have a lead. He's heading out to a pub where Gavin may have worked. If he hasn't seen Gavin since he was a kid, how's he even going to recognize him? All he did was get drunk, bar hopping trying to find Gavin.

Todd paid his mother some of the money he owes and seems to be working hard to keep on everyone's good side. Even Roy is unflapped by Todd's rudeness, advising him to build bridges. He tried with Fiz and Tyrone but he's got a long way to go there. At least he saw off the bullies that were bothering Roy and helped him clean up. Surprised the heck out of Fiz and Tyrone when they heard. Gotta start somewhere. 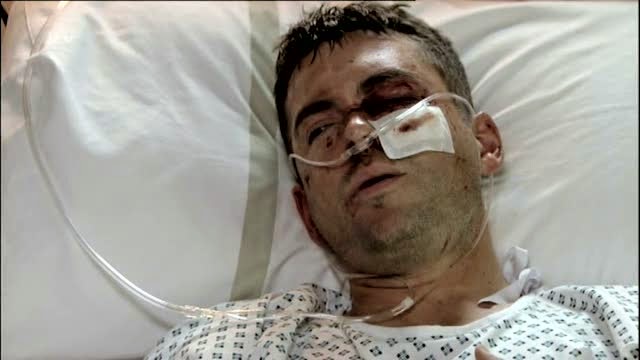 He invited them all to the Bistro. Eva has a kind heart, to be fair, and she tried to talk Eileen into going but it was Todd's heartfelt words that changed her mind. She's even more softhearted than Eva. But Jason talked her into not going. Nobody showed up. Todd went wandering off into dark, shadowy ginnels and got the crap beat out of him. He got his family back but not the way he wanted to do it.

Amy went upstairs to get her duvet. I thought they did over the front room that was Blanche's for her? Norris still hasn't got his package. Why on earth doesn't he just get them to deliver it to the Kabin?