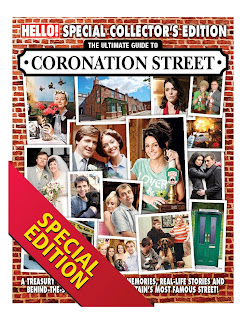 Canadian Corrie fans, there's a great new magazine on the stands. It's a Collector's Edition and it's all about Coronation Street. It's put out by Hello Magazine only here in Canada.

It's available at most magazine stands but if you can get to WalMart, eagle eyed fans have noted that their magazines are 3 for $10.00 and this one counts! Buy three, give some for gifts for Christmas! Send one to a friend in the UK because they can't get it there!

I bought mine last month at Chapters for the face value of $9.95 (Yeah, didn't know about the Walmart prices!) and have been perusing it. They have a run down of all the residences, a bit of history and who lives there now. There's a feature on Corrie weddings, a feature on Johnny Briggs who played Mike Baldwin, a photo feature of Katherine Kelly (Becky) and her new baby and news and updates on former Corrie stars.

There are interviews with Sally Dynevor (Sally Webster) and Shobna Gulati (Sunita Alahan) and lots of features and photos. It's really a great magazine for fans though I have one complaint. There are factual errors in it so I think the research team needed to be a little more thorough. Dedicated Corrie Geeks like me pick things out like a reference to Deirdre having married con man Jon Lindsay (she didn't) and a photo of Luke Britton mis-named as Luke Strong. It's the little things!

Overall, though, the photos and stories will feed your Corrie habit nicely!