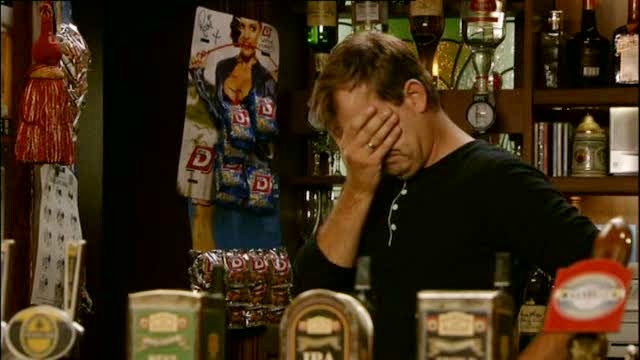 This seems to be "sad" week for a lot of Corrie women and one or two men.

Things are going from bad to worse between Steve and Michelle. She's really busy organizing a Hoedown Country and Western birthday party for a very amusing older fella called Len who had immediate hots for Liz. It was quite funny, actually, with him playing STand by Your Man on the juke and wondering if Liz would dress as a cowgirl and jump out of a cake. Anyway, Steve spends most of the afternoon and evening helping Steph out at the Bistro while Michelle worries, having no idea where he is. By the end of the evening, she goes down to the bistro to get some change but sees Steve and Steph laughing together. She is confused and hurt and he has no explanation. He's avoiding her so as not to have to deal with anything hard.

Even the next day, he's making empty promises. He says he's going to help with the party but he got distracted and bought a little sports car. Steve should have had Kevin give it a once over. Kev did try to warn him that it could be trouble so that's guaranteed that it will be I suppose. It's an ugly little thing, I think and Steve has called it "Lightening!" and he used it to avoid his promised help with the party. Yes it does get dark that early this time of year in Manchester.

By the end of the week, the tension in the pub is thicker than mud. Liz is trying to placate things. They need a holiday? I don't think springing it on Steve at the last minute was the best thing to do. Doesn't it seem to you that Steve is definitely suffering something and nobody is really noticing? Liz tore a strip off him warning him he'd lose Michelle but i did laugh at Steve telling her that she was just as bad at relationships as he is, point, Steve!

He let her down yet again and he can't tell her what's wrong. Only just that it's a "bad patch" and he can't even find the words to stop her from leaving. I'm sorry and good luck??? Seriously, Steve? You might have just said "Don't let the door smack you on the way out!" and it's off to Carla's for Michelle. I don't understand why Michelle said she should have seen this coming. All she's been doing for weeks is thinking he's been going off her. If that isn't a clue, I don't know what is. And Steve can't even talk to Lloyd.

Sally worries that Tim is having an affair and naturally, Sophie gets the wrong end of the stick when she sees Tim going into Anna's back door with flowers (for a thank you) and finally tells her mother that her suspicions might be right. Sally is dreadfully upset at first and then gets downright furious. She tears a strip of Anna Slutty Windass and won't let Tim in the house. She does the time honoured tradition of chucking his clothes out a window at him before he has to admit before the whole neighbourhood that he can't read. Then she's hurt again because he never trusted her to tell her.

It's hard to tell the one you're closest to something embarassing that you fear may put them off you for good. She isn't angry at him anymore, though because she feels awful that nobody seems to trust her with the deep and painful truths, remembering how Sophie ran away rather than tell her mother she was gay. Maybe it will be ok now. I am glad they addressed the issue where Tim and Faye first connected online even if it was a bit sloppy.

There, now, Sally is taking over his lessons. He's gonna regret that unless she takes the schoolmarm thing to the bedroom!

Alya is upset as well, because she had a job interview with Carla and came over all snobby about silk when Carla mainly uses polyester. That defies the storyline where Rob stole all that silk from her a couple of years ago unless that was a one off for a special order. They think we don't remember these things! Kal sticks his neb in and mortifies his daughter but i bet it will work. But Carla's taking a chance on her anyway because most characters have to work on or very near the street, right? To be fair, with a design degree, Alya is well qualified.

Faye is another sad female as she admits to Craig she is sad to have to leave her house. Craig is an absolute star in these scenes. Really, he is. Lovely little friendship between the two of them. The Windasses are making excuses to make themselves feel better for having to move out of the house but Faye says, or at least pretends, that she likes the flat. Gary will be sleeping on the sofa. I forgot, Katy and Joseph live with Stef so at least they're not stacking them like cordwood against the wall. Nice scene between Anna and Gary in the empty house. I guess Izzy won't be visiting as often, though, it would be difficult for her to get up that many stairs. 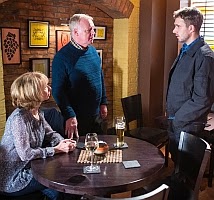 Kylie's troubled, she keeps getting texts from Callum but she keeps having bad days and every now and then, she slides back and gets another handful of speed.

Gail was not sad, at least. She and Michael got a lead on where Gavin is though Gail did get drunk on mulled wine, always fun to watch. Michael is scared to bits to push that doorbell but he didn't run. Only Gavin wasn't in so he left a note, Gail always comes prepared! Michael was on eggshells but answered the call. He's so nervous to meet up with him. David doesn't think Michael should tell him about the heart condition straight away.

Finally we all meet Gavin. It looked like he almost backed out himself. Yes, it was awkward and there are huge regrets and a lot of baggage, but they made a step in the right direction. Looks like it was as emotional for Gavin as it was for Michael and if Michael did give him any explanation, we didn't hear it. 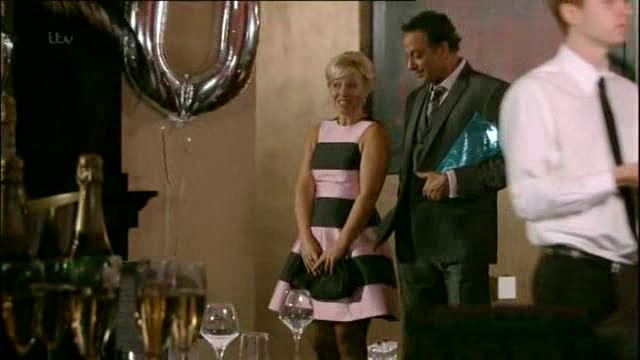 Dev has a party to go to and he doesn't want to because he'll be the only single man there. Mary's free, she'll go. No thanks but can she babysit? Ouch. And she lashed out and got her date after all! Great stuff! Awww but she had an allergic reaction to the glue for the false eyelashes. Now, she's been to the medical centre. Why didn't they take the eyelashes and make up off her when they were giving her the once over? They'd have had solvent that would have worked. Dev saw Julie in the Bistro and they ended up going together instead. Julie looked amazing as she always does. Dev's friend, Dom, took one look and zeroed in and Julie loved every minute of it. Dev, on the other hand, looked a little green around the edges.

Katy is determined to build a new career. Good for her. Norris still hasn't got his parcel and since two vehicles were delivering on the same street at the same time it's a fair bet it was Royal Mail. It also must have been two different delivery companies. And the delivery depot guy was deliciously, annoyingly obnoxious! What a great scene! And still no parcel! That's been the only funny bit in this whole excruciating storyline. Deliver the damn thing to the Kabin!