(This post was originally posted by Clinkers (David) on the Coronation Street Blog in September 2014.)

Well, we've survived yet another Corrie wedding. Well done us! Let's hope we can get a refund on that toaster we bought them and hurrah, we get to stow away that unopened box of confetti yet again. All's well that doesn't end well. 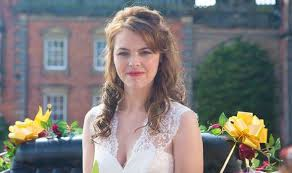 The wedding episodes were, as we have come to expect, a metaphorical car crash. For over a decade we seem to have been served up one disaster after another. This week was no exception and so there was little to be excited or titillated about. There was one poorly acted scene (naming no names) which led to a collective groan in my house. Other that that though, there were moments of joy. Old sourpuss Michelle plodding across fields in search of Amy's bouquet was fun as was the triumvirate of Sally, Kevin and Tim. The latter two had their beer goggles on and were obviously up for a traditional wedding booze-up.

As for the wedding guests? Well it seemed to be whoever was available. No Deirdre but hey, here's Norris! Lots of irrelevant blethering on about a parcel which managed to irritate the now-as-standard ratty Rita. Norris does have his uses then. The Kirk/gay waiter mix up was like something out of a 1970s Carry On film. All we needed was Sean to gurn and bellow "Matron!" It was fun though and served as a nice distraction from the non-wedding.

Could it be that the showdown wedding format has outlived its welcome? At the risk of sounding a thousand years old, part of me longs for the day when the high point of a Corrie wedding would be some bitchy aside from Annie Walker to Elsie Tanner. Where the bride and groom said "I do" in front of an audience either sniffing in disdain or sniffing with emotion. Where the wedding party took its place at a trio of tables with a cake centre stage. Where someone complimented the staff on the 'nice bit of ham' that has been served. Where someone read out a few good luck messages from almost-forgotten neighbours. Renee Bradshaw never attacked someone with a stiletto. Eddie Yeats wasn't unmasked as a bigamist at the altar. Mavis Riley didn't get jiggy with the best man in the days running up to the wedding. Enough is enough. Please, the next time some poor resident rattles on about their nuptials, let's just have a little less . . . well, drama. 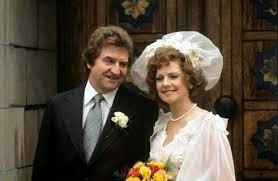 Elsewhere Liz and her candy floss hair were much in evidence. As ever she seemed to switch between 'bellowing harridan' ( for Tony) and 'unsympathetic harridan' (for Steve). Hopeless as a mother. Some people have found the Gailification of Michael Rodwell a bit of a downer but in their own clumsy way, the Platts do seem to be forming a caring circle around him. We have no idea how things are going to pan out with the prodigal son, so having Gail and co looking out for Michael may be no bad thing.

Seeing a more vulnerable side to Cilla was actually quite touching although in typical Cilla style, she did not allow herself the treat of a good weep. That would have been too much for all of us. How did Sinead manage to track her down? Not that it really matters. Maybe this is a chance for Fiz and Ches to bond with their errant mother before it's too late. Hopefully Cilla will be around to attend Beth and Kirk's wedding. Another church, another hat for Rita.

I really felt that the writers took the easy way out with another (yawn) bust up at a wedding. When Tracy lunged at Carla my reaction was Oh brother and then I looked back at my newspaper. I think it would have been much more effective to have a wedding where Rob and Tracy truthfully vowed their love for one another and we saw Tracy happy. Then Carla could drop the shoe later.

It was kind of an easy way out but then they couldn't do what you suggested, having the wedding then have Carla lower the bombshell because they did that with Tracy and Steve's wedding with Becky. And Tracy would then be stuck married to a murderer.