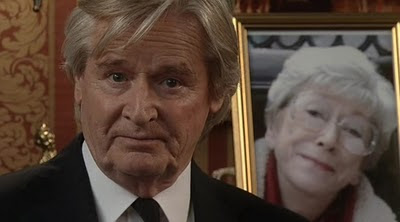 Grand Day Out award: Gold Star: Blanche would have heartily approved of her funeral and wake.

Optimistic award: Gold Star: Steve And Becky... Amy's mother is in the nick for murder and they both smoke, live in a pub and have serious criminal records. Nobody said adopting was going to be easy. Or even feasible!
Silver Star: Sean is trying to get in touch with Violet and figures it will all be just fine.

Spiteful award: Gold Star: Tracy is back with a vengeance, literally.

You can say that again award: Gold Star: Deirdre did say that Blanche was good with words. Not usually complimentary ones either.

Not a Romantic Bone in his Body: Gold Star: Roy's marraige propsal for financial reasons didn't quite stoke Hayley's romantic hopes and dreams.

Lines of the week 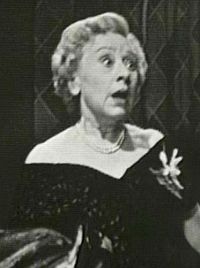 Norris about Blanche "Honesty can be overused. She used it like a pair of knuckle dusters!"
Becky "I look like a pole dancer" Steve "That's why I married you"
Fiz "Becky!!! You look smart! Not up in court again?" (oops!)
Mary "Don't make me stalk you!" (um...) "It's just a minor glitch, we can get through it!" (totally delusional)
Deirdre to Ken "She thought the world of you really" Ken "Was that when she as cutting me down to size? ... which I need from time to time!"
David "Since when is pulling a registered charity?"
Rosie "See ya, or as they say in Spain 'Sayonara'" (only if Spain has been shifted to Japan!)
Blanchism, about Annie Walker wearing shocking pink at Tracy's baptism "She looks like Barbara Cartland with a slow puncture"
Posted by Tvor at 06:21

I thought this week's eps were some of the best in a long time.

Yes they were, weren't they!

Agree!! As much as we all hate her - would be great to have Tracy back on the scene somehow. Very very sad to see the end of Blanche as a character with Maggie Jones' passing - was looking at some of her "best of" lines on YouTube. Laughed myself silly at the scene where she was drinking and nailing each and every member of the Barlow family in turn!! Classic stuff indeed.

Blanche was definitely a one off