Newsflash: Underworld Seige, all blown up

As night falls, the Police are able to speak to Tony Gordon on the Underworld phone.

Roy and Hayley share a moment together safe and sound as reinforcements unload from a Police van.  Carla's boyfriend Trevor arrives on scene to find out what is going on.  More locals fill the street. 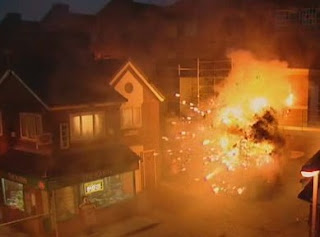 Gunshots are fired sending onlookers into a panic.  Trevor breaks free of the bit of police tape encircling the factory and bounds towards it screaming the name of his other half.  At the same time, out of the battered down door, Carla runs like the wind into the arms of her beau.

From my post, outside Gail McIntyre's house (who is currently on trial for murder of her husband), I can see him.  Tony Gordon, escaped convict, murderer.  The madness in his eyes will haunt my dreams for a long time.  His gaze is firmly fixed on his escaped hostage.  His eyes bore down on her for what seems like hours, but really only seconds.  Clutching his left shoulder, due to injury I am guessing, he turns and disappears into the glow of the fire and blanket of smoke.  Just as I am about to try and get to Carla for a statement the factory explodes and we all hit the ground.

Locals are being asked to return to their houses as firefighters arrive to start the clean up.  The fate of Tony Gordon will be announced shortly.....
Posted by Tiddsmom at 16:56