Newsflash: Have you seen this Man? 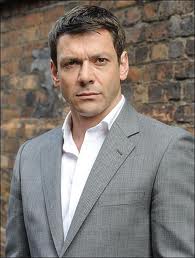 A man currently in prison for murder has escaped today.  What was thought to be a medical emergency is now appearing to have been a planned break out by former Underworld CEO Anthony "Tony"  Gordon.  39 year old Gordon, of Weatherfield, has been serving time for the the murder of 34 year old Liam Connor.

Eye witness reports say that the the ambulance carrying Gordon to Weatherfield General was run off the road by an unmarked van and a masked man was seen with a gun.  Both men were then seen making their escape in this van.  Highfield Prison has confirmed that Tony Gordon was being transported to Weatherfield General following a possible heart attack.

Tony Gordon is described as 5ft 9, medium build, brown hair, well groomed with heavy Scottish accent.  The Police are urging anyone who may see or come into contact with the prisoner to call the authorities immediately as Mr Gordon is considered armed and extremely dangerous.  It is vital that anyone living in the Coronation Street area of the city be very cautious as there is high concern that Tony is acting out of revenge.
Posted by Tiddsmom at 07:00

And he's pretty handy with a spurtle too. Be careful out there.