40 years of Rita on Coronation Street - a tribute 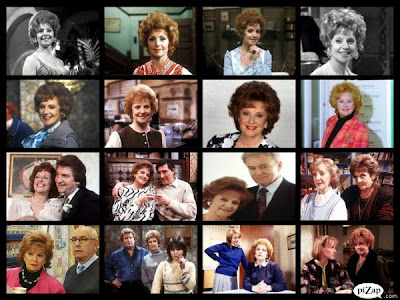 Today marks the ruby anniversary of flame-haired Rita's first appearance as a permanent character on Coronation Street. Although her very first appearance was in December 1964, she didn't become a regular until 1972. And apart from a gap between February and April 1972 and from October 2009 to March 2010, Rita has been a constant presence on the cobbles. Over the years, she has gone from a saucy songstress to Duchess of the Street and despite nearing 80, she's still as beautiful, youthful and smart as she was in the 70s and 80s.

I've made a tribute to her above using photos of her over the years and thanks goes to Sam Taylor, moderator of Facebook's Corrie4ever (great page!) for showing me how to do so. In the tribute we see the young Rita in the clubs and then as Queen of the Kabin. Also, the significant men in her life - true love Len Fairclough, evil bully Alan Bradley and sweet Ted Sullivan who died of a brain tumour after three months of marriage. She's been out with about 15 other men as well over the years! Rita's main regret has always been that she never had children but she has mothered many over 40 years - John Spencer, Sharon Gaskell, Jenny Bradley, Sally Webster and Tina McIntyre. And also the many hairstyles she's donned over the years - but one thing's been constant - the redness.

The Kabin has been a constant thread in Rita's troubled life and she ran the newsagents for 36 years before selling to Norris but she's still working there and in June next year, The Kabin and Rita will be celebrating 40 years of business and, God willing, she will still be there dishing out lemon sherberts. But Rita couldn't run the business alone. For 24 years, she had faithful assistant Mavis at her side and they had a very close friendship despite being chalk and cheese. They were a brilliant double act and one can smile thinking about Mavis dithering and Rita rolling her eyes heavenwards! After Mavis left the street, Rita was lost without her and hired Leanne and then Blanche as her assistants but the chemistry wasn't there. Enter Norris. Rita had found someone as eccentric as Mavis. For over a decade, Rita and Norris have become a classic double act and provide the comic relief against the now more sensational Corrie. And although he now owns the Kabin, Rita still reigns supreme. Norris has a soft spot for Rita and did propose to her in 2007.

While Mavis and Norris are her closest friends, Rita is a popular member of the community and can mix with the younger and older residents of the street. Her other main friends over the years have been Emily, Bet, Alf, Audrey and Ken. She was also friends with Elsie but due to Elsie and Len's romantic past, Rita was always jealous over their closeness. I'm sure Len saw a lot of Elsie in Rita - the red hair and fiery personality: a siren!

Rita also has a musical talent - she can sing. In her early years she was regularly seen in the Capricorn Club or the Gatsby singing Shirley Bassey numbers and she also sang at the Ogdens' ruby wedding party. That was the night Len was killed and Rita vowed never to sing publicly again. But she has done - she sang at the Millennium party, she sang at Fred Elliott's wake and recently sang in the Rovers on Christmas Day.

So here's to Rita Littlewood/Bates/Littlewood/Fairclough/Sullivan! Congratulations on 40 years on Corrie! And also thanks to Barbara Mullaney/Knox on her brilliant portrayal of an iconic character!

Are you as big a Rita fan as me? Have you got a favourite Rita moment? Leave a comment!

I have a photo of Rita from 1964, I think i will be posting a full character study of Rita at a later date and the photo is with that. I don't remember Alec in the 70s but i do believe the actor was in some small parts before Alec.