Farewell to Becky from me too 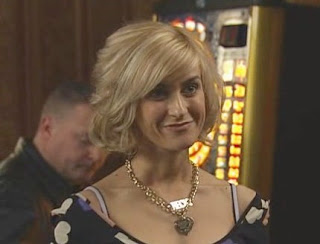 (This post was originally posted by me on the Coronation Street Blog in January 2012.)

Yes, this is one more tribute to Becky and Katherine Kelly. Most of us at Blog Towers have been on Team Becky most of the time she's been on Coronation Street. Me? I've had a lifetime membership.

I've done a character study and a bit of Becky's history on the show over here. I like to look at a character and how they've evolved over their time on the Street. I'm very glad Becky was able to leave with her head held high instead of dejected, with tail between her legs.

I know she's not been a favourite character for everyone, but nearly always has for me, especially once they put her under Roy and Hayley's wing. Pure gold and there was, for me, strength after strength as Becky overcame one kick back after another.

The party girl is still there, but she's going to be Billy's mum and Danny's girl. Yes, she'll probably mess up sometimes, but I think Becky's going to make something special of her life from here on in.

I really love the happy ending she was given. I hope we hear from her in a few years married and having a baby of her own thanks to some new treatment for her condition, only found in Barbados.