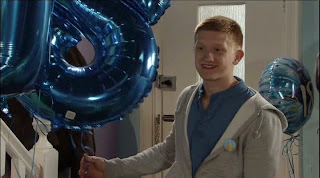 Smug Cow award: Could Sunita be any smugger around Dev? I think the mighty will fall hard and it'll be sooner than later.

Over protection award: Gary's only adding to Izzy's stress by hovering over her, going behind her back to Rob, and shouting the odds at work.

Inarticulate Award: Ok, I've given him a chance. But I can't understand a word Ryan is saying, even when he's sober.

Fat Brenda's got competition award: Kylie on the switch at Streetcars! Brill!

Generous award: Aww, Roy bought his mother a flight to Palm Springs. She raked him over the coals but was pleased really.

Weatherman fail award: The rain was pouring down on Ryan but Norris, head out the window, was bone dry.

Pink Plank award It wasn't even the pink shirt that Steve had on, it was that faux-Elvis hair he had! 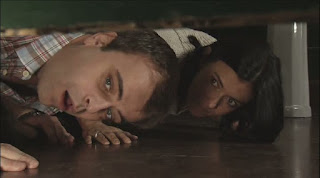 Pants on Fire award: Ryan told Michelle that Kylie gave him the drugs and lies about everything else, too! He just says whatever his mother wants to hear but at least she doesn't believe him now.

Playground award: I'm gonna tell your mummy on you! But David is rightly angry about Ryan offering Kylie cocaine.

Ally award: Gail defends Kylie! She even complimented her!

Naive award: Michelle said she really didn't know much about drugs. Really?  She's worked in clubs and pubs most of her adult life.

Pearls before Swine award: I love it that Sylvia dresses to the nines to Skype with Milton, just like a real date! 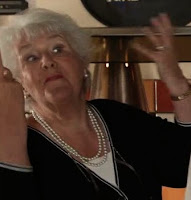 Backtrack award: Ryan told his mum he "did a bit of coke, all right?" And then he's telling the police and his mother it was only the one time, his first time.

Pants on Fire award: Kirsty pretended she'd seen the Doctor and that it was just hormonal mood swings but Tyrone caught her in a lie. Then she let Deirdre think Tyrone hurt her.
Ryan's still scamming money and doing drugs in spite of him promising not to do it again and stealing from his mother to fund it. Lloyd is right, he's a toerag.

Fuelling the fire award: By leaving Tyrone, Kirsty's only going to make people think he really was knocking her about.

Running off at the mouth award: Deirdre is gossiping about Kirsty all over the place. Gail got fired for that didn't she?

See a solicitor award: Finally! Tracy asked when she's going to get her share of the house sale and Steve isn't going to give her any.

Deja Vu award: Looks like Tyrone may have lost another woman and another child.

Musical ambiance award: Tyrone in the pub with "Do You Really Want To Hurt Me" playing in the background. 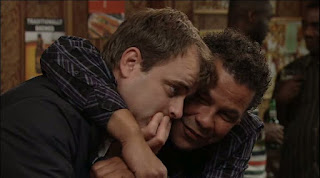 Dynamic Duo award: Lloyd is back and Steve's got him!

Lines of the week:
Sunita to Leanne "You've been bouncing between Peter and Nick for so long it's like watching a flippin tennis match"
Eileen about Ryan "He's drooled on my postit!"
Ryan "Mom please stop, my sides are splitting"
Lloyd to Karl "We hire the odd lowlife but we draw the line at scumbag"
Steve "Pink is the new black for the man of today" (Yep, red sock in the white laundry"
Kylie to a cab client "Have a brew and stop fussing!"
Steve "He just meeds a steer in the right direction. The firm hand of a firm but achingly cool hand" (who would that be, then?)
Tina "Sean, you break a nail and it's a major drama"
David about Kylie "She's after having a bath" Norris "It's an annual event"
Kylie "I've never read a book in me life" Norris "And she says that so proudly!"
Beth "I lost my virginity in Blackpool...on the ghost train."
Kylie to Michelle "D'you want to explain why you still have all your teeth?"
Emily to Norris "I think you've got the mistaken impression that this is your house"
Steve "I'm not that cunning and conniving" (Yes you are and you know it)
Deirdre "Maybe it's none of my business, but..." (You're right, it's none of your business)
Tracy "How can you sit there and lie to people?" Steve "I'm a businessman!"
Dealer "I don't usually do house calls" (how do you normally sell it? On a market stall?)
Mary "You don't pay people to be your friends" (but you do exact a price, if you're Mary Taylor)
Tracy to Norris "I'll be all right in a few hours without that slap-head... Hoover... Nazi!"