Could Kirsty's abuse last for years? 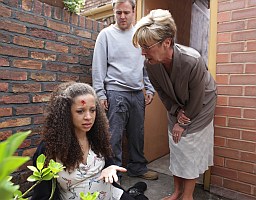 (This post was originally posted by me on the Coronation Street Blog in August 2012.)

Alan Halsall has been doing the rounds of the media this week in anticipation of Friday's storyline where Tina discovers Tyrone nursing bruises on his body.

There's a video on the STV.com site as well as on ITV.com (neither of which is viewable outside the UK). The gist of it all has Kirsty lashing out again when she discovers that Tyrone has excused Tommy on one of his repayments.

Because Tina caught him medicating the resulting bruises, Tyrone confides in her. He has convinced himself that Kirsty's mood swings are related to pregnancy hormones but Alan admits in real life situations like this can go on for years. Having said that, I don't think we'll be subject to an ongoing storyline lasting that long.

Next week sees Tyrone hit a breaking point and strike back at Kirsty, her injuries are seen by Deirdre and he's embarassed and angered that his neighbours may find out and think he's the one that's the abusive one. It all boils over but after taking a breather, Tyrone returns home to find Kirsty has done a runner!