Gentle moment of the week: Roy practicing chess moves with the salt and pepper shakers!

That went well award: For all of Gary's complaining about babysitting, he was well chuffed about being a dad!

Deal with the Devil award. Mata Hari Star: Tracy thought she could be a double agent to spy for Steve and ruin Lloyd's new company. She was rubbish at it and went too far.

Are you new here award: Gold Star: Seriously, would Lloyd REALLY take anything Tracy says as truth let alone hire her???? Do the math..."really bad day"...Tracy's first day on the switch. Coincidence?
Silver star: Carla reckons 9 year olds love smoked salmon, hummous and olives for party food?? And why was there champagne/sparking cider (or whatever) on the table and sad songs on the stereo?
Bronze Star: You'd think Tracy would finally clue in that Steve doesn't want her after all this time but no, she still tries and still gets knocked back. And Steve... Can't understand why Tracy won't help him out. You spent the last episode or two slagging her off and trying to eject her out of her home without any notice. What do you think?

Sports Day award: Well, wrestling *is* a sport after all. 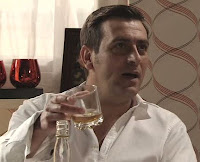 Off the wagon award: No surprise here. Peter's back on the booze again. When the going gets tough, the tough get drunk and ugly.

Restaurant from Hell award: With the collapses, explosions, arguments and fights that happen regularly in the Bistro, I'm surprised they have any customers at all.

Sibling rivalry award: Rob and Carla certainly seem to have had a rocky relationship

Repartee award: Tracy winding Norris up. This could be fun.

Useless Suck Up Twit award: Brian really is clueless. He can't even stand up for a kid being bullied because the bully is related to the school governor. 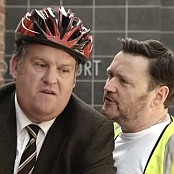 Fashion fail award: Brian was following safety rules but he did look ludicrous in that bike helmet.

It's All About Me award: Peter interrupts business meetings, conversations, disappearing first on his own and now with Simon, you name it, because his problems are more important than anything else. He doesn't know who he *can* talk to about Leanne taking Simon away? Um. Solicitor?

Reality check award: Peter is finally realizing he made the wrong sacrifice. Simon is more important than anything. Pity he didn't think of that before.

Heart in mouth award: Ken and Leanne thought they might have to identify Peter's body.

From a Bang to a Whimper: Carla and Peter are over.

From a Whimper to a Bang: Kirsty flew off the handle again. 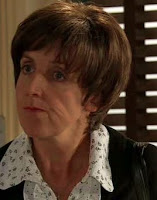 Lines of the week:
Steve "I have a cunning plan!" (does that make anyone else shudder?)
Steve "When it comes to fighting dirty, I know which side I want Tracy on!"
Lloyd to Tracy "Have I got MUG written on me forehead?"
Peter "You never lose your basic speed" (says a smoker who's going up against a regular runner")
Steve "We could call it Judas Cabs if that makes you happy"
Nick baiting Peter "You should have Victim tattooed across your forehead"
Peter "He's smarmy, and he's smug and he's not bringing up my son!"
Nick to Gail "Battersby's not a swear word anyway she's a Barlow now" Gail "They're not much better"
Owen "You've only been back together 5 minutes and he's not long gone off his rocker"
Carla "It's me, me, me" Peter "No, it's Simon, Simon, Simon"
Anna "Here he goes again. The Sage of flamin' Weatherfield"
Nick about carrot cake "You don't see many rabbits with glasses on" (channeling me dad who always said that! I still hate carrots! I wear glasses. connection?)
Beth to Tracy "You're the best housemate I ever had" (Really????)
Mary "I'm afraid i mated your husband. Twice"
Roy "I know it's easy to dismiss Mary as an eccentric" Hayley "That's probably down to the fact that she's completely doo-lally" (And Roy doesn't see it. Yet.)
Tracy "Hayley in sequins...You all teeth and tight trousers. Yeah, actually, it's put me off me cheese" Norris "Pity, I thought a lump of cheddar might shut you up"
Ken to Peter "You could have chosen to prove me wrong"
Norris to Beth "When you said you wanted to take Tracy out, I thought you meant for a drink!"
Carla "You drag me down and that's something I don't need any help with"
Simon "Dad. You're drunk" (And everyone's heart breaks)
Carla "Peter, this is not a conversation, it's a broken record"
Peter "I can see things very clearly lately" (through booze goggles)
Carla "You think you can walk away" Leanne "But you can't"

I Can not stand Leeann lately. Her behavior toward Peter was disgusting and now the way she treated Tracy during the interview.not to mention using nick I hope the character gets some pay back soon