Smoke on the cobbles 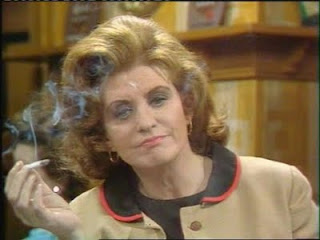 (This post was originally posted by Clinkers (David) on the Coronation Street Blog in July 2012.)

There was a time, down Weatherfield way, when it would have been remiss of a character not to have an ashtray somewhere about their home. If you turn back the clock to the sixties and seventies, everyone was at it - whether it be Mike Baldwin with "one of my little cigars" or Emily Bishop toking on a crack pipe - Corrie was wreathed in fumes.

Which makes it so astonishing when you see a member of the cast light up nowadays, such as the second regeneration of Ryan Connor. Even more bizarre then that it is a young character with a bad habit. Maybe that's what it is all about - giving the new lad an edge. It's been done before. Jamie Baldwin and Gary Windass sported ciggies in early episodes. Sisters Becky and Kylie were forever billowing smoke from their nostrils. The less-than-subtle message being that it's only those from thr wrong side of the tracks who partake in the evil weed.

Of course, it wasn't always the case. Back in pre-history, Elsie's continuous puffing was almost an accessory. Even early days Rita and the nascent Audrey never said no to a fag. It goes without saying that the poorer characters - Bet, Hilda, Vera - relied on their cigarette breaks. The likes of Annie, Emily, Betty, Ena and Minnie never partook (although Doris Speed was an avid smoker in real life).

The younger blokes in Weatherfield have generally steered a path of abstention, save for the slightly 'gone to seed' middle aged gang of Steve, Lloyd and Karl (maybe his strange colouring is nicotine yellow?)

The Street's most celebrated smoker is Deirdre, often to be spotted huddled in the back alleys, dragging on a Superking. Deirdre has made it an art form and forty years of fumes have left us with that rich, baritone voice. Give her another twenty years and she'll be Darth Vader in a twinset.

A bit of social observation then. The glamour of the sixties smoker has given way to bad lads with bad habits. Fags for the memory...

See also: Pictures of Coronation Street women smoking - past and present - on screen and off.

Anyone who is looking forward for best home decorative item then all they are advised to see this beautiful creation made by skilled artisans: Smoke Fountains
We are online seller of pujan items. So, Buy Pooja Samagri from our online portal to well perform the Puja of any God.
Also see Best Pooja Samagri, Puja Samagri Online , Pooja Samagri Online.