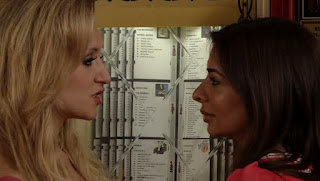 Crosby Stills and Nash award: Gold Star: If Eva couldn't be with the one she loved... but she couldn't love the one she was with either and he knew it.

Hollow Victory star: Dev might have "won" but it's only because Sunita was rejected by Karl and Eva has it all figured out.

Deaf as a post award: How come Neither Tracy, Beth or Craig heard the estate agent knocking that sign up onto the bricks?

Undermining award: Gold star: Karl is most definitely pouring poison into both Stella and Eva's ear. He's got Eva on side and she'll push her mother to get Sunita out.
Silver Star: Stella pouring poison in Leanne's ear about Peter spending time with Simon.


Soap Cliche award: Scupper the house viewing with a messy, smelly house and bad behaviour. Eddie Windass did it better!

Over compensating award: She can barely stand to be in the same room as Dev. So she goes back to him because Karl has rejected her and asks Dev to marry her!

Guilt Trip award: Peter thinks giving Simon to Leanne is the same as Ken sending him away to Glasgow after his mother died.

Overcompensation award: Having a baby with Carla isn't going to replace the Simon shaped hole in Peter's heart.

Beatification award: Maybe the Powers that Be are reading the blogs. St. Ella actually referred to herself, sarcastically, as Saint Stella! She must be a saint, though, she took him back.

Marking your cards award: Peter's insecurities about Nick bubble over and are threatening to come between he and Carla.

Coming over all Previous award: Faint star: Mary got all a-quiver over the idea of Norris fancy dancing.

Pants on Fire award: Karl *said* he'd get gambling help but it sure didn't sound like it. 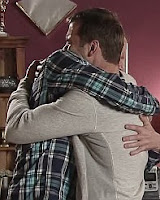 Bull in a China Shop award: Mary was twirling Maria around the shop and knocking stock off the shelves. That's the kind of Mary I like, rather than that nasty spiteful one.

Rebound award: Leanne moans about being alone and Peter being happy, so she falls right into Nick's arms because he still loves her if nobody else does.

Most Realistic Breakup award: Marcus and Sean. It was so sad to watch but at least there wasn't a slanging match. Not then anyway.

Wonderful stuff: Gail drinking at the bar. Eva snarking at Sunita and Leanne. Beth with a furry mobile cover, mistaking the rat for the phone!

Back where she belongs award: Wonderful to see Eileen back in the cab office!!! and it's great to see Lloyd back, too!

Protest too much award: Big Mouthed Star: The more Gary went on about the bad side of looking after kids, the more you weren't surprised that Izzy came over pregnant.

Backstabbing award: Not only has Lloyd started a new cab company, he's stolen Streetcars' contracts and a few of the drivers and he tried to pinch Eileen as well!

Lines of the Week:
Karl "You're mother's a sucker for a sob story" Eva "Sunita gives damn good sob"
Stella to Leanne "Am I overstepping the mark?" (yes)
Leanne "Addiction I could cope with, I'm not keeping the bed warm for another woman."
Eva "I'm sick of her miserable face" (look in the mirror lately?)
Mary to Hayley "I didn't know you were a dancer" (she's only been taking salsa lessons for 2 years)
Stella "I wanted to change the world. I wanted to change you. Now I just want to change the locks!"
Eva "Button your blouse up, Sunita, it's not a knocking shop!" (Claws in, ladeh!)
Stella "You know me. 'Saint Stella'" (Wait a minute...)
Mary "We don't make old bones in our family. We burn bold and bright and then are snuffed out like a cheap candle"
Sunita to Eva "Grow up!" (says the woman who's cleavage is spilling out all over)
St.Ella "what about love, Leanne?" Leanne "Trust me. It's overrated"
Simon "As long as we're together, it doesn't matter where we live"
Marcus "The only thing i spooned last night was Liam's 'Tickle Me Elmo'"
Simone "Is that a rat?!" Tracy "No, it's just his mother"
Sean "We should only be together if it's brilliant and amazing and fabulous. And it's not"
Eileen "Steve! Get a grip!"
Gail "Lewis. Could I have a virtuous glass of water to put my son's mind at rest?" Lewis "Still or sparkling?" Gail "Still. I'm sparkling enough!" (Bwahahaha!)
Norris "Saviour does have a certain ring to it"