Corrie and the competition 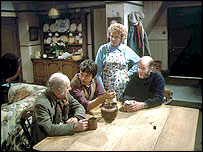 (This post was originally posted by Clinkers (David) on the Coronation Street Blog October 2012, reposted to this blog with permission.)

By crikey, the folk of Weatherfield will (possibly) be raising a glass of something alcoholic/bucolic and wishing their Yorkshire neighbours "Happy 40th birthday" next week. Yes, Emmerdale has notched up four decades on the box, although it bears little resemblance to the dour, unbelievably slow Emmerdale Farm that creaked into view in 1972. For over twenty years, each episode contained the same three scenes. Annie Sugden would wander from the aga to answer the phone. Amos Brierly would spend fifteen minutes lighting is pipe. Matt Skilbeck would hovver by some sheep dip. Roll end credits. Then in 1993 they dropped a plane on Eric Pollard's wife and things changed forever.

Corrie always seems to have existed alongside Emmerdale as opposed to being in direct competition with it. However, the latter has drifted into the realms of unreality. A rural village filled with teetering Aunt Sallys, forever referring to each other as "slag" or "cow". Vengeful businessman with trophy wives, daft old women with tea cosies on their heads. It's all a bit mad but bravo for having lasted the course.

Emmerdale moprhed into EastEnders-on-Cowpat around a decade or so ago. Corrie, bless it, has never really taken on the whole characteristics of any of its competitors. Bits have been tweaked here and there. Some have worked and some have not. By staying relatively true to itself, Corrie has seen off most of the competition.

In the Street's early days, the BBC had little idea of how to counter the show's success. Most of their attempts to challenge Street supremacy crashed and burned. Compact, the tale of life in the offices of a glossy magazine could hardly compare with Ena and Elsie bellowing at each other. The 1965 footballing saga United was deemed a foul and was sent off for an early shower. The Newcomers lasted for four years but viewers tired of tales in rural Suffolk. 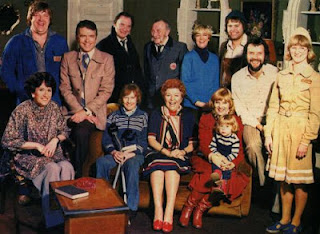 For twenty four years, Corrie battled it out with Crossroads, ITV's five-times-a-week rendezvous with Meg Richardson and her family, running a shabby motel in the Midlands. Herein lay the show's biggest blunder. With so much invested in the fortunes of one family, by taking away the central linchpin (Meg), the whole edifice collapsed. Corrie's production values were sometimes a little ragged but Crossroads took it to a new level - actors waiting for their cues, awkward pauses. There were gaping holes in plots such as Jill Richardson's eleven month pregnancy or Benny's fabled, unexplained disappearance. 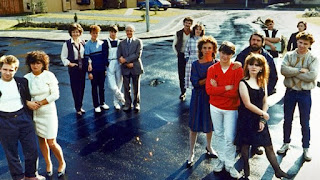 The only soap that ever came close to making Corrie look anachronistic was Channel 4's Brookside. Launched in 1982, Brookie was filmed in real houses and was far more hard-hitting than anything on offer in Weatherfield. Characters such as Sheila Grant and Edna Cross seemed more realistic than the likes of Phyllis Pearce. For a time, Brookie seemed to have inherited the social realism that had been integral to the success of Corrie back in the 1960s. Yet for all of that, Brookside did not survive. By initially having no areas for social interaction, such as the Rovers and the Corner Shop, the Liverpool soap had to present all of its action in the existing houses. Characters began falling down stairs at an alarming rate. There were sieges, religious cults, epidemics, murder a-plenty, bombs and helicopter crashes. By 2003, the show was looking ridiculous and was axed. Corrie sailed on like a stately galleon but by that point was no longer the cosy drama it had been back in 1982. 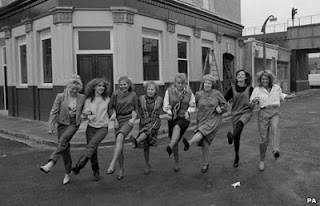 Of course, EastEnders is still around. Those who have read the story behind that particular soap will know that creators Julia Smith and Tony Holland spent time on the Street in order to see what would work and what would not. They also put the idea of 'family' first and foremost and in 1985, Corrie was very much a land of single middle-aged women. Enders got the upper hand in a short space of time but has forever lacked the warmth and wit of Weatherfield. The London soap may win the awards but we know which side our balm cakes are buttered. 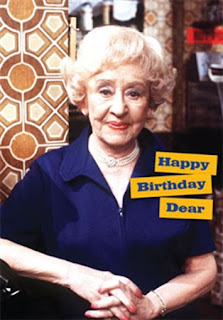 So let's raise a glass to the Dales folk, their countless explosions, their lip-glossed lovelies and Annie Sudgen's aga. And then let's get back to watching Britain's best soap.