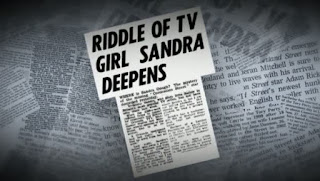 Very long time viewers may remember that in 1971, Irma Ogden Barlow vanished suddenly from the show, never to be seen again. In the media, there was a big to-do about it as nobody knew if Sandra Gough was fired.

This week on the last episode of The Corrie Years, Sandra Gough revealed that she had wanted to leave for some time and was dealing with her mother's serious illness. She had enough one Friday, called her bosses and said she wasn't returning. She was surprised when the media took it up but clearly never corrected the misconception. She went on to other roles including one in Emmerdale.

Over on my State of the Street blog, there's a bit more and there's also a potted history of Irma Barlow. One of the photos shows Irma in 1964 with RDennis!