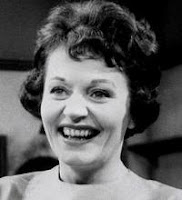 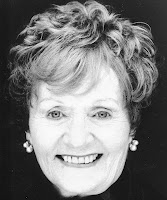 First appeared: 23rd December 1960
Last appeared: 31st December 1975
Doreen Keogh played the role of original Rovers barmaid Concepta Riley/Hewitt/Regan between 1960 and 1964 and made guest appearances in 1967, 1972 and 1975.
Born in Dublin circa 1926, Keogh was trained at the Abbey Theatre School in Dublin before moving to London. She secured roles in repertory theatre and made her TV debut in Lady Precious Stream in 1950. For the remainder of the 1950s, she concentrated on her theatre career and didn’t return to TV screens until an appearance in Emergency Ward Ten in 1960. That year, she was cast in the role of 34 year old Rovers barmaid Concepta Riley in new drama serial Coronation Street. During her time on the cobbles, Concepta’s storylines included marrying Harry Hewitt in 1961; giving birth to son Christopher the following year; having a fraught relationship with stepdaughter Lucille; marriage problems with Harry; and Christopher being kidnapped by an unstable Joan Akers in 1962. Although she was the first Rovers barmaid, she only stayed in the post until she married Harry and became a housewife and mother. In 1964, in a bid to revamp the show by getting rid of deadwood characters, new young producer Tim Aspinall axed the whole Hewitt family. Lucille was salvaged as ITV bosses felt a street without children was unreal. Harry, Concepta and Christopher were written out in August 1964 when they all moved to Ireland where Harry took over the garage of Concepta’s father. Upon her departure from Coronation Street, Keogh had a one-off appearance in new Midlands soap Crossroads. While Harry visited Lucille in 1965, it wasn’t until 1967 that Concepta visited for the wedding of Steve and Elsie Tanner. Upon their visit, Harry was crushed to death under a van, leaving Concepta a widow. She left again for Ireland. Keogh returned to the role in 1972 when Concepta announced to Annie Walker and Lucille that she was getting married to Sean Regan who also came to introduce himself. Upon his visit, Sean made a pass at Bet Lynch. Bet didn’t tell Concepta who married Sean that year. Concepta visited the street for the final time in 1975 and admitted to Annie that she was aware that Sean slept around but still loved him. Overall, Keogh appeared in 321 episodes in total.
Since her departure from Coronation Street, Keogh has secured many acting roles over the years including in Z Cars (1974), Minder (1984) and Play for Today (1974-1984). In 1989, she was cast in the role of Mary O’Hanlon in new Irish soap opera Fair City, a role she would play until 1995. In 1998, she appeared in two episodes of hit Irish sitcom Father Ted. She also starred in Irish drama series Ballykissangel as Imelda Egan between 1997 and 1999. Additionally she’s had roles in comedy The Royle Family (1998-2006), comedy-drama Cold Feet (1998-2003), hospital drama Holby City (2004) and made her latest TV appearance in drama Cutting It (2005). She appeared in Irish film How About You in 2007. Keogh as appeared as herself in various Coronation Street linked programmes like Classic Coronation Street (1991), Life after the Street (2001) and Coronation Street Secrets (2003).
Keogh currently lives in County Wicklow, Ireland. She has been married twice and during her time on Corrie in the 1960s she enjoyed a romance with on-screen husband Ivan Beavis (Harry Hewitt).
Have you ever seen or met Doreen Keogh? Have you any pieces of trivia about her? Would you like Concepta to visit Weatherfield? Who'd remember her -  only Ken, Emily, Dennis? Maybe some of the other veterans remembered her from her visits in the 1970s. What do you think?