Has Lewis the Leopard Changed His Spots? 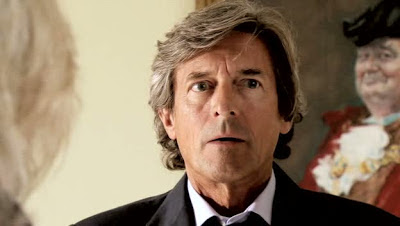 
This latest turn up with Lewis is interesting. He goes missing and then a woman turns up claiming he's scammed her in the past. When he finally shows his face, he admitted it to Audrey, apparently not knowing that Penny had filled her in. Right about then, I started to wonder if the pair of them were in on it together even before Gail mentioned it at the end of the second episode.

Lewis urged Audrey to run away with him. He wouldn't stick around because he reckoned Penny would sic the police on him, I guess. It seemed just like the old days when he was trying to con her into a hotel in Greece and very nearly did it. He claimed he couldn't go through with it then because he realized he loved her. Did he? Or is he playing a long game?

It was a nice move, Audrey pulling Penny in to face Lewis/Hugh. I've always loved how they use a particular camera angle in Audrey's house with her beloved, honest and upstanding Alf looking over Lewis' shoulder into the camera when Lewis is on a particularly hot seat. The comparisons are obvious.

Should Audrey be paying off Penny? Is Penny right? Is Lewis going to take her for her cash? Is he working with Penny?  He's so smooth that you just never know. Or is it a case of the boy crying wolf? Maybe he has changed. Or maybe pigs fly.