(This post was originally posted by Clinkers (David) on the Coronation Street Blog in October 2012.)

She's hardly Mary Berry. She's not Mary Baker, Cake Maker. She's barely Mary, Mungo & Midge. Three cheers though for Mary Taylor, nuttier than a fruit cake but adding a twist of something cosmopolitan to the lard-heavy diets of Weatherfield folk. If she's not ladling borscht down people's gullets, then she's dipping into the unknown with her taramasalata. Efharisto, duck! 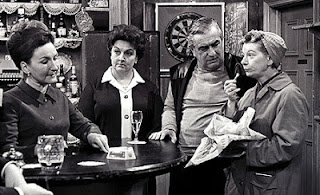 The food on offer in cobble-land has never exactly been, well, cordon bleu. Much of it looks like (and in the famou case of Les Battersby many years ago, was) roadkill. Down the years we have been presented with some, frankly, horrific meals. The Ogdens were forever emptying portions of flabby fish and chips on to dinner plates. Early 1980s Gail was often 'treating' Our Brian to some hideous leftover from the café. The Rovers always sported that cabinet full of insipid pies and you could always pop over to the corner shop were someone would be blowing fag smoke over the freshly prepared ham barms. Then there was Sally and her never-ending plates of spaghetti hoops and fish fingers. This heady diet of e-numbers could well explain why Rosie turned out the way she did. 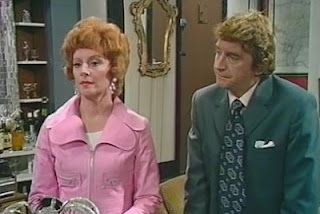 For many years, our household recounted, in moments of mind-numbing boredom, a particular dinner served up by Rita 'th'wholesalers' Fairclough, as she was then. There were gasps abounding as the latterday cabaret chanteuse shimmied into view with a plate of dry food. Anaemic mashed potatoes, a gristly chop, bullet-like processed peas . . . AND NO GRAVY. No wonder Len went and crashed his van at high speed. A dry dinner? Bad, bad Rita! 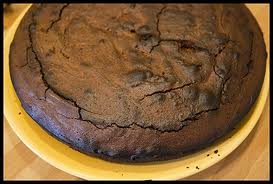 Jackson's chippy, Prima Doner, Wong's chippy, Leanne's cheerless Italian restaurant - they have all provided comfort and, probably, botulism for the fair folk of Weatherfield. You can understand why eating out is so popular given Deirdre's recipe for success. No, I'm not speaking of her legendary smoked ham. In fairness it's not smoked when she takes it out of the packet but after Deirdre's exhaled on it. The stuffed marrow is now legend, flabby, over-cooked riot of dullness. She presumably missed all three series of The Great British Bake Off, judging by that Victoria sponge she man-handled on to the dining table a few weeks ago. It looked denser than a jam-filled black hole. I’m surprised that half of Weatherfield wasn’t sucked into its leaden, grey core.
Deirdre’s outstanding culinary moment though came back in January 2011 when she provided numpty Ciaran with his tea - chicken pie with peas and ready salted crisps. I kid you not! Deirdre - a woman so idle that she couldn’t even be bothered to peel a potato. We salute you Deirdre Barlow, domestic goddess of Weatherfield! 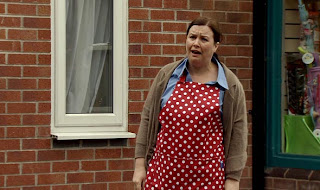 Personally, I think loveable, psychotic Mary should host a 'Soap Opera Food' themed night at Roy's Rolls. Guests are welcomed with either a pint of weak shandy,  a small ginger beer masquerading as whisky or a 'Deirdre' of red wine. They then sit down to a grey-ish plate of animal fats which they push around without ever actually finishing. After a slab of ash-laden Victoria sponge, the guests are served with a pretend cup of coffee, poured into remnants of Ivy Tilsley's hideous chunky brown dinner service, circa 1979.
Sick bags all round?

Thanks for this. I laughed through the entire article. Britain is not known for its cuisine, so I guess the prop people are attempting accuracy. Considering "you are what you eat", it's a wonder any of the characters can string a sentence together.

I'm a proud owner of the Corrie cookbook http://www.amazon.co.uk/Coronation-Street-Cookbook-Favourite-Recipes/dp/0091753856
Dated but some good scran