Will Lewis get revenge on Gail? 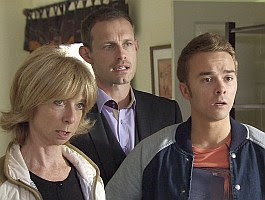 The official Coronation Street website at ITV.com has a good interview with Helen Worth about Gail's latest scheme to put a con on the Lewis the con man. Gail decided to partner with Gloria to set up Lewis. Gloria tried to lure Lewis into agreeing to flee to Spain with her but he declined and then found out that Gail was behind the plot and Audrey knew!

Gail saw it as a win-win situation. If Lewis had agreed to run off with Gloria then they knew he was a rotter and they were well rid. If he didn't, it proved he had indeed reformed. Gail "sees it as giving him a taste of his own medicine".

In a nutshell, it blew up, Lewis left Audrey though vowing to pay her back before leaving town, and Gail thought "good riddance" at first. She did feel badly that Audrey has been hurt and did try to apologize but Lewis won't have it. Lewis  pawned a valuable heirloom watch to pay Audrey back and Gail felt so bad she bought it back for him. When Helen was asked if there could be revenge on Lewis' part towards Gail she replies "Gail thinks that this gesture as well her apology should even the stakes between the pair but has she grossly underestimated Lewis?"

Nigel Havers is taking some time off to do Christmas Panto and is probably going to return. It could very well be that Lewis is plotting revenge on Gail. It's a tough one to call. Do you think Lewis had this coming? Given his past and how much he's hurt Audrey before, was Gail justified in trying to expose him? You can see where she was coming from, after all even if she took the wrong route to do it. Do you think Lewis will get his own back on Gail? How do you think he would do it? 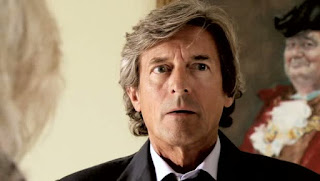 You know what I enjoy? When Lewis has been dropped in it, there is often a camera angle in Audrey's house that shows our lovely Alf looking over cad Lewis' shoulder, most definitely throwing up a comparison to the steady, honest and reliable Alf Roberts. Lewis represents the excitement Audrey always wanted but at what cost? She grew to love Alf dearly but his stodginess often exasperated her. Audrey may just have learned a valuable lesson...

Be careful what you wish for.