(This post was originally posted by Stevie Dawson on the Coronation Street Blog in March 2016, reposted with permission.)


Love it or hate it, Coronation Street has taken the last 56 years by storm. Ever since that first scene where Florrie Lindley giddily pictured her name above the corner shop, and Elsie Tanner stared into that pocket mirror resigning herself to the 'knacker yard' back in 1960, Tony Warren's precious creation has been unmissable even for those strange creatures who choose not to watch the world's longest running soap opera. In so many parts of British life, the comparisons and references to those rain soaked, terraced streets, Deirdre's famous glasses, Bet's beehive and leopard print - are ever present. Warren wrote what he knew about, he'd spent his childhood as an outsider, observing, taking mental notes. Those observations were the blueprint for what has become a British institution and perhaps gives us all the valuable lesson of paying more attention to the world around us. We all live in our own mini-soap operas, thankfully Warren shared his with the world and we are all the richer for it.

Corrie's initial success came from its brave depiction of working class northern life, written with grit and honesty, Warren stubbornly, and rightly insisting on casting people as close to the 'real thing' as possible, none of those RADA types. From that grew a bigger picture of the individuals within the Street, those who became enduring and much loved characters, entering into the nations hearts as if we knew them personally. From Ena Sharples, to a young Ken Barlow, viewers were hooked and invested in the ongoing stories of these people's lives. Many of us still are.

Corrie has undergone many changes over the years, but elements of the programme have become part of British culture. Here I take a look at some of Coronation Street's most enduring cultural icons:

Deirdre Barlow - Yes one woman captured the spirit of Corrie more than most, particularly during the tumultuous 90s. Her trademark specs, toned down in later years, became more famous than her and endless impersonations followed. Add in a few disastrous relationships and a spell in jail, and the British public were lapping her up. Anne Kirkbride may have left us, but Deirdre Barlow is a long way from being forgotten. Here's a clip from Britain's Got Talent, with Marea Smithson impersonating Deirdre and Audrey.

Bet Lynch - With her broad Heywood accent, gaudy outfits and bleach-blond beehive, Bet was like a caricature of a brassy barmaid, but she was all real. It was like the soap gods had sent her down from soap heaven, such was the appeal and brilliance of her character. Again, her unique and individual style set her apart from everyone else, and that's how she became and still remains, a cultural icon. Bet had an early rivalry with another Corrie icon, Elsie Tanner -here are their characters being played in the Corrie musical that never was on This Morning.

Dark satanic mills - Only yesterday I overheard a conversation about 'up north' being grim and 'just like Coronation Street'. We all know Corrie only represents a stereotypical northern town, and that there's a big wide world outside Weatherfield, but those red bricks and cobbles are just as famous as the people that walk on them. 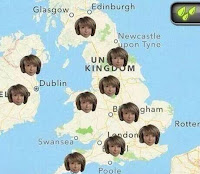 Social media tributes - Coronation Street has it's own social media team these days which you'll see Tweeting away before, during and after episodes with spoilers and memes. But it's not just the professionals sharing photos, gifs and tributes online. Corrie's young audience have thought of many creative ways of paying tribute to their favourite soap, from memes of 'Severe Gails', a 50 Shades of Rita Hair Colour Chart, and of course that legendary 'Audrey Roberts Noise' video. 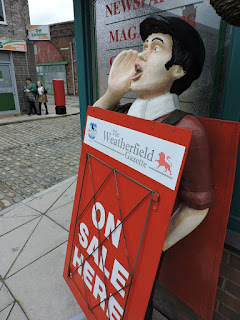 Read all about it - archivists and former writers of Coronation Street have published numerous books about Corries history, the Coronation Street Blog and Corriepedia are a great online source of Corrie facts and opinions, but there are other books you should look out for too, particularly Corrie Blog Editor Glenda Young's Christmas bestseller - Deirdre, 'A Perfect Duet' a tribute to Roy and Hayley's time together, and that infamous character Norman Bates with a Briefcase. It's difficult to think of many other television programmes that have been written about in such a way.

The musical that never was - Coronation Street has covered pretty much every medium- television, film and feature length episodes, they have their own newspaper / newsletter the Weatherfield Gazette, cast members have released their own music and a whole raft of tributes, films and documentaries have been made about the soap, so it was only a matter of time before they made a stagemusical about it. Sadly after many rehearsals, ticket sales, television promotions and a great deal of excitement, the whole thing fell apart. Perhaps this was a sign that as much as we want the show to be appreciated in creative ways, we shouldn't get too carried away. That said, writer Jonathan Harvey wrote the Corrie! stage play which was received positively and you can read more about it here.

Stars in their alleys - everyone wants to be in Coronation Street. That's why we've seen some great cameos and celebrity bookings on the show over the years. Think what you like about the newer additions of Sarah Harding and Shayne Ward, Corrie has welcomed the A list with actors including Sir Ian McKellen, Norman Wisdom and Peter Kay. Others including Sir Patrick Stewart and June Brown appeared early in their careers and went on to greatness. Here's a great list of famous Corrie stars from Corriepedia. 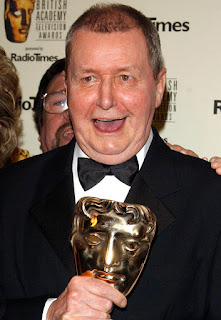 Award winning telly - There's a snobbishness towards soaps (continuing drama) and on the whole that's undeserved, Coronation Street has won numerous gongs including BAFTAs and RTS awards, and has even recently been recognised for it's effort to create an environmentally friendly operation at Media City. Here's a high-brow RTS discussion about Coronation Street, which took place in late 2015.


So congratulations Tony Warren. Not only did you create the greatest show on television, you became part of British cultural history. When people ask what Britishness is, they think of things like cups of tea, Yorkshire Puddings, queueing, complaining, and watching Coronation Street. That's a legacy to be proud of.