Rana ramps it up 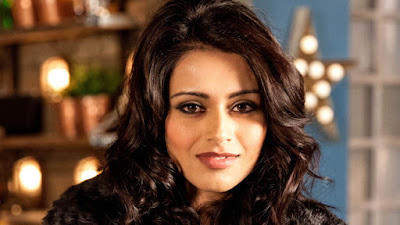 (This post was originally posted by Ruth Owen on the Coronation Street Blog March 2016, reposted to this blog with permission.)

Enter Rana, the latest femme fatale to walk the cobbles. Rana has secured a job at the Medical Centre and is putting down roots in Weatherfield. This is excellent news as what a breath of fresh air  Rana is! It is Bhavna Limbachia who plays Rana and says of being in Coronation Street,  'Being a proud Northerner, it's a dream come true.'

Rana is much needed. She is cheerful, full of fun, smiles and laughs a lot and seems to know her own mind. She is single, though maybe not for long and understandably, has plenty of self-assurance.

Her appearances have been terrific, so far - exciting, engaging, vibrant - though not a little manipulative. Young, intelligent and beautiful - it is no wonder Robert had to tell Zeedan to put his tongue back in when she first came into the bistro with his sister, Alya.

Alya appears fond of her university friend, and the two girls are clearly very close as Alya tells Rana all about the Gary/Jason/drunk debacle. Alya is only too aware, though, of what Rana is like, particularly around young men. Alya shakes her head, rolls her eyes and has seen it all before, as Rana flirts with any male who has a pulse. Rana herself is more than aware of the effect she has on them. So far, so harmless. But. No one enters Weatherfield without a skeleton, clanking and clattering around somewhere.

When Jason enters the Bistro (or the 'greasy spoon with delusions of grandeur' as Norris puts it) Jason and Rana have a brief chat and there seems to be appreciation from one to the other. On clocking this, Zeedan wards Jason off but as Jason points out, 'I'm a paying customer. I've as much right to be here as anyone else. So get out of my face.'

Zeedan apologises to Rana but she seems to have enjoyed the rumpus. 'Sorry about that, it's just that me and him - we've got history. It's complicated.' Zeedan rexplains. Alya fills her in on the details. 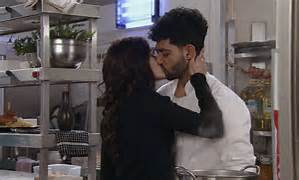 Rana takes it upon herself to steal into the Bistro kitchen to see Zeedan. 'What you doing- you shouldn't be back here.' Zeedan tells her. 'I won't say anything if you don't,' she replies. Zeedan points out it's about health and safety, but she takes no notice. She tells him that she wondered if one of the reasons he stepped in between her and Jason was because he was jealous. 'Jealous?' he says. 'You fancy yourself, don't you?' She replies, 'Not half as much as you do.' She kisses him and walks away.  Zeedan doesn't seem to be too concerned about health and safety now.

Usually I hate when they introduce new characters out of the blue but I like Rana! After seeing her reaction to the ex-boyfriend in the Bistro, I think there's more to her story! Maybe she's married....? I definitely think (and hope) there's a shady past!