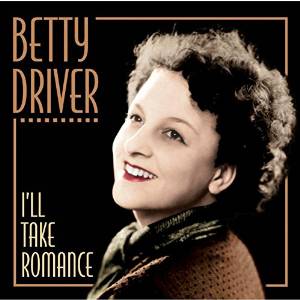 Betty Driver, who played Betty Williams on Coronation Street, was also a singer in real life.  A new CD called 'I'll Take Romance'  is due out on February 26th.
The 'I'll Take Romance' album has been newly remastered and features 12 songs never before on CD.

In 1930 at the age of just 9, Betty began performing professionally in music hall variety and became one of Britain's best loved singing stars of the 1930s and 40s making countless records, hosting her own radio and television programmes and starring in three feature films. During World War II Betty toured frequently with ENSA, entertaining troops stationed both at home and abroad.

'I'll Take Romance' showcases highlights from Betty's 20 year recording career, from her very first 78rpm record 'Jubilee Baby' released in 1935 when Betty was just 14 to her last commercial recording 'Let's Gather Round The Parlour Piano' issued in 1954. Featuring 12 tracks previously unavailable on CD, the selections range from novelty comedy numbers to sublime torch songs, ably demonstrating why Betty Driver was considered one of Britain's finest vocalists of the era. As a bonus, the collection features three live tracks taken from rare radio broadcasts, the highlight of which is Betty's 1955 performance of 'The Sailor With The Navy Blue Eyes', revisiting the song she became synonymous with throughout the 1940s. The new CD companions the 2013 Stage Door digital album The Complete Betty Driver (1935-1955) available from iTunes and all other digital e-tailers.

The CD also coincides with Betty's song 'Monday, Tuesday, Wednesday (I Love You)' featuring in the new Waitrose TV Advert - you can hear Betty singing in the advert, below.