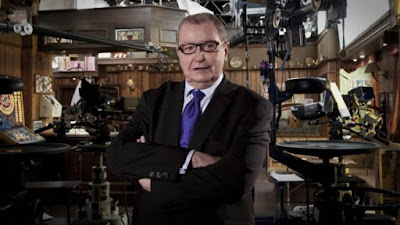 (This post was originally posted by Tommy Cowell on the Coronation Street Blog in March 2016, reposted with permission.)

We have a guest post by Tommy Cowell who has a very good perspective of the legacy left by Tony Warren.

To those familiar with the 2010 drama ‘The Road to Coronation Street’, you will recognise that line of dialogue. It was how a young Tony Warren introduced himself to a security guard at Granada Studios in 1960. A couple of scenes later, he returns to the same security guard and says, “It’s Tony Warren. The Writer.”

Now then, writers! Imagine a parallel world where Tony Warren didn’t meet the security guard for a second time. A world in which Tony Warren, “the actor”, had never created Coronation Street.

In this baron, post-apocalyptic world in which Coronation Street does not exist, there would also be no Emmerdale, Eastenders or Hollyoaks. All these shows are breeding grounds for new writers. All screenwriters, whether they know it or not, have a lot to thank Tony for.

Most of the great screenwriters in our country have worked on a soap. Jimmy McGovern and Kay Mellor started their careers on Brookside, Sally Wainwright’s second writing gig was at Emmerdale and Paul Abbott’s career took off following a stint at Corrie. Russell T. Davies created not one, but TWO of his own soaps, as well as storylining for the famous cobbles. Would the careers of these wonderful folk be as illustrious had it not been for Tony’s vision?

I don’t think you have to enjoy soaps to be a good writer. However, I think it’s beneficial to appreciate them. It’s essential to understand the way their stories are told over weeks, months, hooking the nation in their millions. The structure that Tony created in 1960 is the same structure that’s used today. Whenever a writer is starting out, and that writer rejects the soap opera as a lesser art form, I honestly think “what an idiot”. It’s like a builder not understanding how bungalows are constructed because they prefer mansions.

Over the years, many producers, storyliners, writers and directors have made it possible for the soap genre to evolve – but it all begins with Tony. Because of him, there are workshops and writing schemes that invite new writers – writers who have no representation and no contacts – into the world of writing for TV drama. (ITV and BBC writersroom are useful gateways for newbies.)

So from one writer to another, thank you Tony Warren. The actor, the writer, the legend.