What a week. What. A. Week.  I'm glad that these post-watershed Coronation Street weeks only take place once a year. I'm not sure I can cope with any more of the type of drama that we were treated to this week.

Time then, to take a more light-hearted look at 5 things we learned in Corrie this week.

The dictionary definition of quicksand is this: loose wet sand that yields easily to pressure and sucks in anything resting on or falling in. Sound familiar? It's perfectly describes Nick. He can't even get ill properly. When Leanne told Peter that Nick had suffered from hypothermia, Nick corrected her: "Mild hypothermia." What a wet drip he is.

What the return of Denise Osbourne might mean once things calm down chez Barlow remain to be seen. Will she and Ken rekindle their romance? Who knows? But one thing's for sure, with those specs, Denise brought the spirit of Deirdre's glasses back to the show. 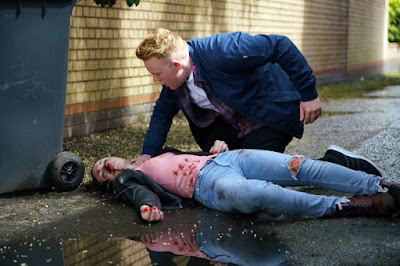 "There are two types of cops," Kirk told Craig over a cuppa in Roy's Rolls. "Hunchy cops or legwork cops."  It turns out that as well as being a right little star, Craig's a hunchy cop too.

Peter's still at AA
After saving Nick's life when he was stuck in the quicksand, Peter told Leanne: "Think I'll get myself to a meeting".  Can't say I blame him, it really must have knocked him for six having to save the life of his nemesis Nick.  It was a reminder that Peter is still battling his drink demons and continues to need the support of the Alcoholic Anonymous meetings.  On which note, have a look back at one of Corrie's best ever scenes (with apologies to overseas viewers who may be unable to view it, but that's due to ITV and licensing I believe).

Dead magpies are lucky after all 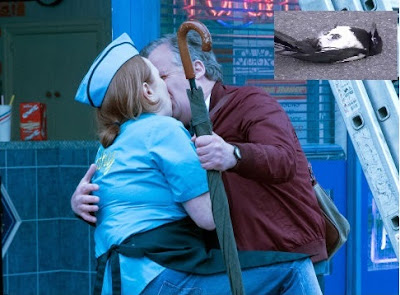 Cathy finally got her man, giving him a full-on frontal snog. I loved her wrap-around leg move too! To see just one magpie would be traditionally unlucky - one for sorrow, two for joy - but it seemed to bring luck for Cathy and Brian.