Do You Recognise this Coronation Street Nurse? 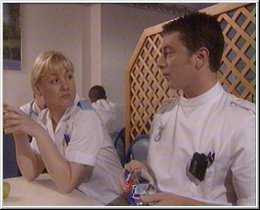 One of the pictures I've posted was Nurse Martin Platt but then it was pointed out to me that the female nurse sitting with him is none other than a young Lisa George, who currently plays Beth Sutherland in Corrie!

Lisa has been in Coronation Street twice before her role as Beth Tinker (now Sutherland).

She first appeared, as in the picture above, as an unnamed nurse colleague of Martin Platt in September 1997.

And she appeared again for six episodes as a Family Liaison Officer working on the investigation of Tommy Harris's murder between March and April 2005.