Respect your elders? Not in Sinead's book. 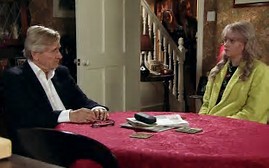 (This post was originally posted by Ruth Owen on the Coronation Street Blog in May 2017, reposted to this blog with permission.)

Was it just me, or was anyone else shocked and a little angry regarding Sinead's conversation with Ken earlier this week? Ken tries to speak to Sinead, but she's having none of  it. 'I don't want to talk about it - it's private and embarrassing,' Sinead tells Ken. Ken does his best to make amends but Sinead, who is quite vicious to him, tells Ken that 'All you were thinking about was yourself,' suggesting that what Ken wanted was to bask in the reflected glory of a child of his going to Oxford. Sinead accuses him of going on about it being a golden opportunity for Daniel and that for Daniel to be stuck with a 'dizzy tart' like her, would ruin his chances.

Throughout this encounter, Ken is totally non-aggressive and is seeking understanding. Was Ken so wrong for trying to encourage his son to go to Oxford? It is the undeniable truth that an Oxbridge degree is worth having, so from Ken's point of view, a man who values academic achievement and a man who maybe regrets not having aspired more to educational achievement for himself, it makes sense. Isn't it completely normal for parents to want their children to achieve their full potential?

Sinead told Ken that at one time she had trusted him and that she had looked up to him, but that now, he makes her sick. Strong words indeed. Ken remains conciliatory, but must be smarting from Sinead's hurtful comment.

It may not have been ideal but Daniel could still have gone to Oxford, with Sinead and the baby. It wouldn't have been easy but with a little imagination and a lot of hard work, they would have been fine. Sadly, it seems all the fun of Daniel and Sinead's early relationship has died,

It is unfair of Sinead to blame her termination on Ken. It was also out of order for her to have said, 'I don't know who did this to you, but whoever it was they have my sympathy.' Not your finest moment Sinead - not at all.

Maybe it is old-fashioned to respect our elders, but here, sadly, Sinead showed that she could do with respecting Ken a good deal more.

Sinead and Chesney became dull and boring and her and Daniel are heading in that direction full steam ahead...can she just have some fun for a change??