(This post was originally posted by Michael Adams on the Coronation Street Blog in May 2017, reposted to this blog with permission.)

Until Wednesday I'd never known something quite as thrilling as bidding in a live auction. It was, of course, the sale of personal items belonging to iconic Corrie actress Jean Alexander that brought me to The Saleroom website that morning, and I was waiting with baited breath to see if I could successfully win something related to Hilda Ogden for my Corrie Collection. 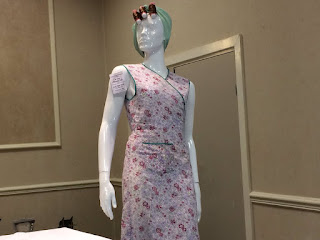 I logged onto the website just before eleven that morning and was relieved to see that they offered postage for the items. I knew that this was the only way I'd be able to obtain something given the auction was being held 170 miles away in Southport. I didn't really know what to expect when I actually clicked the link to bid in the live auction, and it wasn't long before the suspense crept in as a new item popped up. If it was a particularly interesting item, I was so excited to see how much it would sell for, and if it was a particularly random item, such as Jean's paper shredder, I was sat on the edge of my seat waiting to see whether someone would actually buy it.

The third lot in the auction, a large Steiff teddy bear bought for Jean in the 1920s was a guaranteed hit, and sold for an eventual £260. The first lot relating to Coronation Street was this plated nickel silver presentation dish awarded to Jean for her involvement to the show in 1977, and looking back at how much it sold for I regret not putting in another bid. Other Corrie items relating to the show that went under the hammer included a tankard given to cast and crew to commemorate the show's 25th anniversary (which I already have in my collection alongside an accompanying presentation plate), a carriage clock with an inscription regarding the opening of the 1982 Granada set, a pottery owl from the living room of no. 13 Coronation Street, a multitude of awards, signed books, an inscribed Corrie rose bowl, photographs from across her career and the star of the auction - her curlers, pinny and headscarf which sold eventually for £4,200 as we blogged about earlier in the week. Congratulations to the very lucky bidder Trevor Beattie. 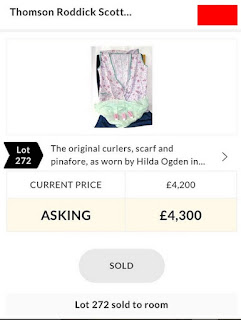 Now I'm not going to lie to you. I didn't win a single thing of Hilda's in that auction, and I was mortified, as looking back I could have quite easily have bidded slightly more on some items. Perhaps not as much as £4,200. However, I did win a few things belonging to Jean. I didn't set out to buy any of Jean's personal items, though a series of random bids placed upon some furniture and ornaments led to us now being the proud owners of a 1930s display cabinet, two elephant ornaments, a pouffe, a toast rack, a photograph of a cat, a trinket box and two ornaments resembling fruit. It's a good job our house is retro inspired. Yes - completely random, though that was the last of my worries.

You know how I mentioned that the website said that they delivered? Well they didn't. I even got an email asking me if I would like a quote for delivery, but was later told categorically that they didn't. At one point on Wednesday evening I was tempted just to ask if any Corrie fans in Southport would want to rent the items off of me, because it seemed logically impossible to obtain them! Thankfully, after multiple long conversations with a kind lady from the auction site I was able to arrange for my cousin who lives in Liverpool to collect the items on my behalf, and with any hope I'll have the items at home in the next few weeks and be able to take lots of photos for my website.

Oh what a long and stressful day Wednesday was. But atleast I found a new love for live online auctions. I felt like I was on Dickinson's Real Deal.

My main Twitter account can be found @MichaelAdamsUk, and Coronation Street: A Collection can be found at @CStCollection and www.corriecollection.co.uk