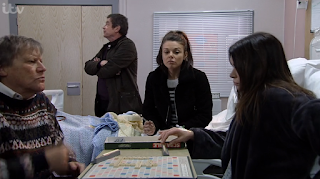 (This post was originally posted by Scott Willison on the Coronation Street Blog in March 2018, reposted to this blog with permission.)


Roy is making Vetch happen.  Personally I would never play Roy Cropper at Scrabble; it's like challenging Stephen Hawking to a quick go at the Countdown numbers round.  But Carla, bless her, attempted to calm his nerves with a soothing game, overruling Kate's queries about his more questionable word choices on the reasonable grounds that he knows more than the all the Connors put together.  If you're wondering, it's a herbaceous plant of the pea family.  You're welcome. 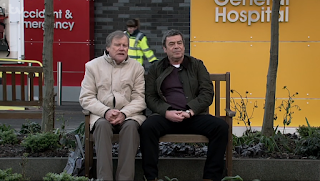 A studio complex is a dead ringer for a hospital.  That's the Tony Warren Building at ITV's MediaCity complex doubling for Weatherfield General there; the show spends so much time in hospitals these days I presume they just leave the signs up all year round.  It was a great location for Carla's two dads - surrogate and biological - to bond over their shared love for the raven-haired minx.  I'm very curious about which bits of Carla's history Roy filled in for Johnny - that time she was tied up in a burning factory by her psychotic ex?  Her first husband's death in a car crash with a prostitute in the boot?  The many, many times she sold a percentage of the business to someone awful and nearly went bust? 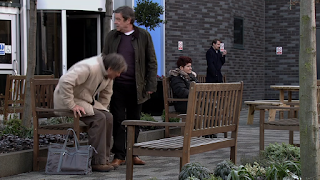 Shout out to the incredibly rude patient sucking on a tab while stood by no fewer than three "no smoking" signs.  My taxes are paying for your NHS treatment, mate; you'd best not be in for anything lung-related. 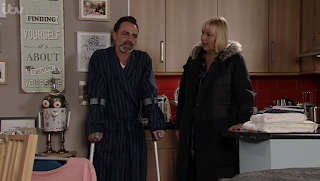 Eileen is the most gullible woman in the Western Hemisphere.  I generally have a lot of time for Eileen.  She's spent her life being trodden on by men of all shapes and sizes, and it's left her with a world-weary cynicism I can relate to.  But even I'm losing patience with her inability to see the bleeding obvious even when it's right in front of her nose.  There's the continuing Phelan drama, of course, where everyone hating his guts doesn't give her a clue he's a wrong 'un.  When Liz McDonald - a woman whose romantic history is an out of control dodgem ride between losers, criminals and good old fashioned idiots - is telling you that your husband is awful, you should really pay attention.  Then this week, Billy put his swift recovery from the ravages of opiate withdrawal down to a stroll round the churchyard; it took her a whole 24 hours to work out that wasn't totally feasible, so Billy said he was just pretending, and she believed him.  Hey Eileen - there's this Nigerian Prince I know who's got a few million going begging; send me your bank details and I'll give you a share. 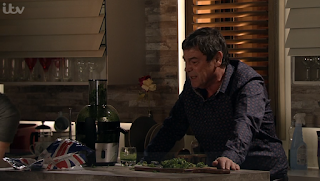 You don't get much juice out of a bag of kale.  Johnny was far too busy trying to make healthy veggie drinks using his industrial juicer to pay attention to Jenny Bradley, which is of course a crime.  Kale smoothies will just make you gassy and turn your teeth green; Jenny has a trikini and wants to whisk you away from your awful whiny children to a life of sangria by the pool - how is this even a contest? 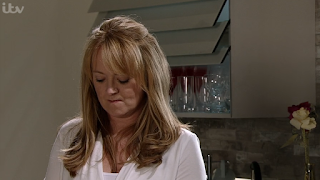 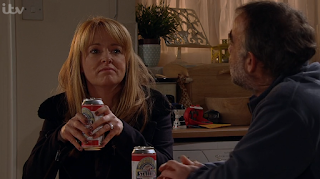 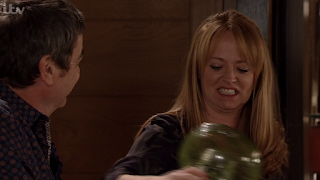 Still, Jenny feeling marginalised means we get reams of AWESOME JENNY BRADLEY FACES, so while their marriage suffers, the audience wins. 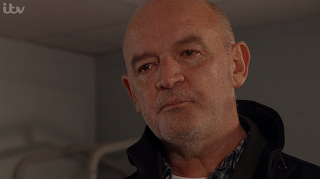 A villain can still break your heart.  Pat Phelan is, by any reasonable metric, an absolutely appalling human being.  He's a rapist, a murderer, an arsonist, and judging by the amount of time he spent sloping around the Street this week rather than doing any building work, he's terrible at his job.  Yet Connor McIntyre's brilliant performance means he's utterly captivating and charming with it.  Who didn't feel a little bit moved when he delivered a quiet, regretful soliloquy to his deceitful daughter?  A single tear rolled down his cheek as he said he could never see her or his unborn grandchild ever again, and I wondered if just once a Corrie villain could be allowed to get away with his crimes.

If you have any idea why Ali wouldn't want to see the woman who's ignored him for ten years, please let me know on Twitter @merseytart.  Or better still, tell Michelle herself, since she seems to think she's done absolutely nothing wrong.