If this is Heaven, Corrie... then what is Hell? 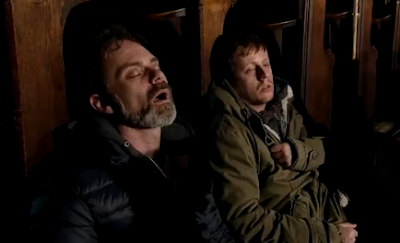 (This post was originally posted by Flaming Nora on the Coronation Street Blog March 2018, reposted to this blog with permission.)

After taking the heroin, Lee said to Billy in the post-watershed scene: “This must be what heaven feels like.”

A spokeswoman for Ofcom said: “We are assessing these complaints under our broadcasting rules, before deciding whether or not to investigate.”

An ITV spokeswoman said: “Coronation Street has a strong tradition of tackling serious contemporary issues in a responsible way. In upcoming episodes we will be showing the very negative side of drug taking as Billy’s life starts to fall apart.”

This fan said, well, nothing. I was lost for words at the end of Coronation Street last night. Just as I was with the Pat Phelan dark episodes. And not in a good way, either.

Not heaven, just temporarily numb
and disconnected from reality,
more like Limbo, suspended from
Heaven, earth, and Hell.

Heaven would be totally and forever
wrapped in pure love.

Hell may be totally and forever
lacking in any love.

Now that Bethany and Billy have
hit rock bottom, you can put that
scene with Bethany and illusionary
Nathan back on the blog.
(it was nice of him to return for
that one essential scene which proved
to Bethany that she is most certainly
NOT in control).

Coronation Street has had its dark moments before: Alan Bradley's attack on Rita; Richard Hillman, for example. Lately though, the darkness seems to be constant and relentless, involving multiple story lines and characters. It's getting to be much too much.

As much as I love the Street I don't watch it to be tuned in to all the woes of the world. I have enjoyed Billy as a great character but I hate this current incarnation. When is Adam going to be outed for his role in this? But am still hooked by Liz, Gemma and others. I guess I am going to keep watching!