Simon Gregson and wife Emma talk openly about their 12 miscarriages 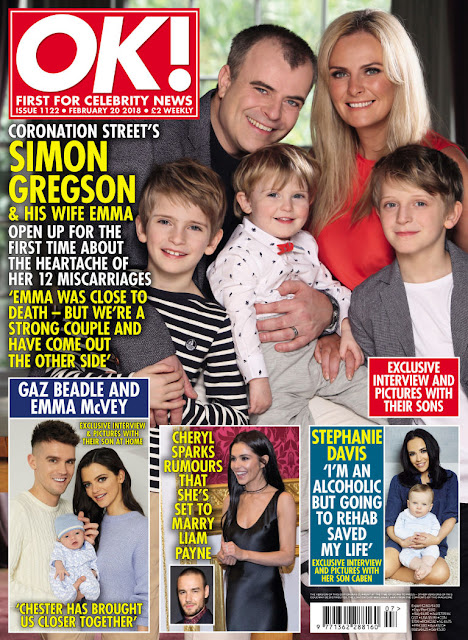 (This post was originally posted by Flaming Nora on the Coronation Street Blog February 2018, reposted to this blog with permission.)


Simon Gregson, who plays Steve McDonald on Coronation Street, rarely gives personal interviews. But he's on the front over of this week's OK magazine along with his wife Emma and their three sons.

Simon reveals that Emma tragically suffered 12 miscarriages, including an ectopic pregnancy that left her needing emergency surgery to save her life.

In the exclusive interview with OK! Magazine, Simon and Emma have opened up about their experiences and about how Emma feared she might not see her sons again.

Emma revealed that she had been suffering from severe stomach pains and feeling ill for a couple of weeks, but she thought it was constipation.

After the pains got so bad that Emma 'couldn’t stand up', husband Simon rushed her to hospital where it was discovered she was suffering from a ruptured ectopic pregnancy.

Emma said: "Up to that point we didn’t know I was pregnant so it came as a double blow to us. It was hard to get our heads around what was happening. I was petrified. I thought I was never going to see my sons ever again. As they were taking me down to theatre I just kept thinking, I’m going to die – this is it, I’m not going to make it. As they were prepping me for surgery I had to keep signing lots of forms. I just felt devastated and so overwhelmed. It was the most frightening time I’ve ever had."

Simon said: "They told me Emma would’ve died if it had been left for a few more hours. She was literally two hours away from death."

Emma continued: "The stigma has been removed from having miscarriages, but ectopic pregnancy isn’t discussed enough – I didn’t really know anything about it. The more you talk, the more you can help other people and spot the signs. It’s such a dangerous condition."

The pair have now resigned to the fact that they will not have any more children, with Simon saying: "I think as Emma has come so close to death, that’s it for us.

"We originally thought Emma couldn’t carry girls, but she so desperately wanted a little girl. I would love her to have one – but now, after nearly losing her, I’m going in and having the snip."

And Emma said: "Every time I found out I was pregnant,I never felt joyous. I would just fear the worst. I don’t think my mind or body could do it any more."