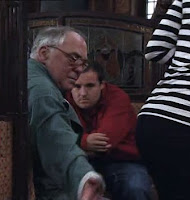 There's life in the old dog yet award: Cheeky star: Jack the Lad.

Heart was in the right place award: Gold Star: Well, at least Eddie was trying even if he didn't bother to read the card with the flowers before giving them to Anna. "Rest in Peace" indeed.

Heart was in the wrong place award: Gold Star: Ashley's heart attack turned into heartburn but he pretended otherwise so he wouldn't have to move to France.

Have you lost your tiny mind award: Gold star: Kylie plans to move to Cyprus with her kid for a man who doesn't even speak English and then offered to sell Max to Becky and Steve for 20 grand. Greedy cow.
Silver star: Why would Norris even consider a weekend away with Mary after the last time? Mystery of the week: Who's sending the flowers to the factory? Guesses on a postcard. John's certainly freaking out - but we know why.

Fashion accessory of the week: Becky's ear-rings. Rather ironic given how the week came out for the McDonalds.

Audrey: "It's bitter out there" Gail: "Not much better in here. Mind the eggshells"
Graeme: "It was watching Carry On Nurse on a Sunday afternoon that I realised I'd become a man" and "Some things are worth pulling stitches for"
Graeme: "All marriages have bad patches." Ashley: "Well this one's had enough patches to make an ugly quilt"
Jack: "Never got RTerry christened. Look how he turned out. If he tried it now, he'd get third degree burns" (And has anyone actually told Terry about Jack? and I hope Jack has an iron clad will made up.)
Izzy "You leave flowers on someone's grave not where they died" (These days, you do!)
Claire: "I see you found your way home" Ashley: "I just followed the trail of storm clouds"
Becky to Kylie: "If I'd known you were coming I'd have baked a cake. Or changed the locks."
Graham to Ashley "You don't have to worry about heart trouble because when she finds out, she's going to rip yours right out of your chest" or "You're not going to be riding the Love Train this side of the London Olympics!"
Mary "There's a dark side to Emily, I've always thought it"

I remember Vera telling Jack that Terry might not be his child, but a result of a dalliance she once had. Does anyone else remember this happening? She was in hospital at the time. Or maybe Jack was...I'm getting old and I've watched the show for waaay too long....

You are correct. She had donated a kidney to her grandson Paul and left Jack a letter in case she didn't survive. She nearly didn't as she'd had a reaction to the drugs. He read the letter to Curly which confessed this but he said he knew about it at the time and he also knew Terry was his son because he was just like his father.