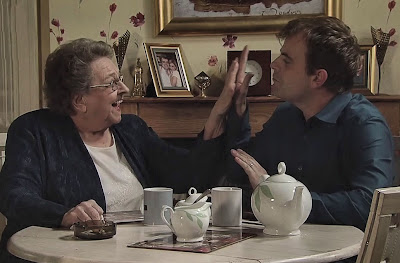 I loved this little scene with Steve and Betty conspiring to give the new bar a bit of trouble.


Brick wall award: Rocky star: Claire is unmoving and is leaving Ashley high and dry and doesn't seem upset at all.

Sneaky award: Gold Star: Kevin nicking the baby's dummy to get an instant DNA test. You gotta love the express timelines on telly. 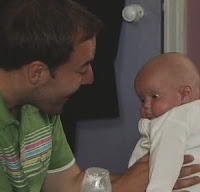 Proud Daddy award: Gold Star: Awww isn't Tyrone over the moon about that baby? Bless! And isn't that a cute baby?

Passed over again award: Bitter Star: Sally's face fell to the floor when she found out Michelle is the new Assistant Manager Trainee.

Hokey award: Paper star: Letters cut out of magazines for a threat note? In this day and age of technology? Seriously? 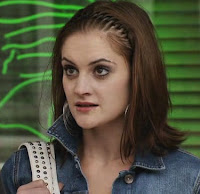 The Witch-Slap line forms to the left. Kylie's really got it coming.

Lines of the week:
Molly about Tyrone" He's the happiest he's been in his life!" Pam "Only because he doesn't know how unhappy he should be"
Molly to Pam: "Nothing's going to happen" (Oh crap, Phrase of Doom alert.)
Nick about Coronation Street "This place is full of busybodies!" (Are you new here?)
Rosie "Your little girl is 16, Sensible has gone out the door"
Pam to Kevin: "If you can't play at being Godfather at least act like a man." (Yay Pam.)
Liz: "Unlike you, some of us have standards." (Wha?)
Nick: "First binmen, now barmaids."
Sophie: "I'll be your lickle baby forever."
Janice: "You've never stitched a pair of knickers in your life." Michelle: "Maybe not but I wear 'em." Janice: "That's not what I heard." Michelle: "I heard you've never taken yours off. Still, no demand, no supply." (Touche!)
Kevin to Sally: "There's no brain big enough to take in everything you witter about."
Sally: "Walk in a straight line." Sophie: "Mum, I'm a lesbian. I don't do anything straight."