How to give a man a heart attack in 3 easy lessons. Poor flower delivery guy nearly went out of his shoes when John came streaking across the road to acost him! John doesn't really give two hoots about Chesney and Katy, or Fiz's scan, completely distracted by his own guilt. Charlotte doesn't give two hoots about John! Ok, the baby is important to John but the baby most definitely comes second in his priorities at the moment. "I KNow what you DId" in cut out letters... honestly in this day and age wouldn't you think someone would just print it from a computer? Can't be traced any easier than a magazine. Charlotte says she's getting letters too and it scares her right into John's reluctantly comforting arms. Something tells me she wants to get used that that!

I see Katy's still lying about spending her nights with Izzy in order to spend them with Chesney. Looks like Owen knows when he's defeated though. He figures he can keep Katy under control. Has anyone ever kept a headstrong teenager under control? Thought not. I can understand Owen being angry though, Katy's only 16 and Ches isn't much older and Fiz is kind of caught in the middle.

I really do think Claire is being unreasonable. What Ashley did is definitely worth a few nights on the settee but to leave him and take his kids away because of it? If i was Ashley i'd be telling her she's not taking the children. If she wants to go, go. Besides, if he doesn't give permission, can she legally take them out of the country? You probably couldn't get away with that here. IT was surprising that Ashley poured his heart out to Jack as they've never been close but probably, Ashley knew a kindred spirit in the world of marraige problems. 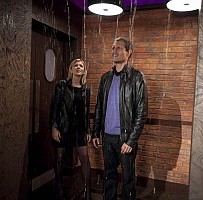 Then there's the little sub-plot about a rival bar opening up with Ciaran changing loyalties and Steve and Betty out for a little pay back and report Nick for rats on the premises. Wonderful stuff!! The water problem wasn't likely caused by Betty, but could be a lot more of a problem.

Michelle's going to work for Carla. Two wonderbras in that tiny office. There's not going to be enough room, i'm telling you! Is it me or are Michelle's "girls" increasing in size? (actually, I think the actress was pregnant at the time) But at least she's no slouch dealing with Janice! Sally's nose is out of joint and i can't honestly blame her. She's got more experience in office work than Michelle even if Carla couldn't stand working with Sally close quarters. She'd have the office ticking over better than it's ever done before.

20,000 is a lot of cash to round up quickly. But maxing out the credit cards and the line of credit is going to come back to bite you on the bum big time. Couldn't you just smack that smug off Kylie's gob? The last bit of cash comes from Streetcars but at least Steve told Lloyd instead of just fiddling the books.  Kylie is just about the most awful of the awful. She probably even gives Tracy Barlow a run for her money though she might not be murderous at least. I've gotta say though, Paula Lane who plays her is fantastic!


The nurse at the hospital could find herself in an awkward position if she's calling every woman coming in for a scan "Mrs." Unless of course, it's written on their charts I suppose. Rosie and Jason are a couple. She's decided. lol! Sally doesn't think Jason is good enough for her. I kind of think it's the other way around! Kidding. I actually think they're fairly well matched. At least in the IQ stakes. You'll notice we now hear the tram go by occasionally. Watch this space.

Cheryl's coming up in the world. From lap dancer to kebab shop cutter to barmaid at the new place. It's too bad the character is about as bland as a bland thing. 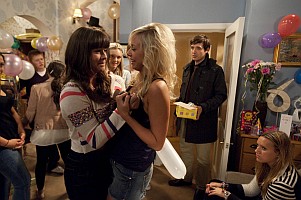 Happy birthday Sophie! Rosie's gift of sexy underwear totaly embarassed Kevin. Baby's growing up! Boy is she ever! Did you notice Sally looking away uncomfortably when Sophie kissed Sian thank you for her pressie? She's still coming to terms with it all and I like that they haven't just dropped it and are showing Sally still doesn't find it easy though she's really trying to get her head round it all. When she does, she'll be the biggest supporter and probably lead the Pride parade! And that was some wild party. Who invited the vicar? I think there's going to be Hell to pay there now he knows she and Sian are in a relationship. And those choir mates will probably never be the same either, having their eyes opened wide!

Kevin is still stalking Molly and now he's determined to find out if he's the baby-daddy. What's he going to do if he is, though? He doesn't want anything to do with the baby. I seriously doubt he'd want custody or visitation because then Sally would find out. He only wants to know because it's a soap ;)) (And how cute is that baby!) It wasn't very fair for Pam to call the christening a sham. No matter who's baby it is, a christening isn't so bad is it? If it's what you want. I get it, though, it's the whole Godparent situation she was talking about. It just didn't sound that way. And the way Kevin is snapping at Sally, i'm really surprised she's not suspected something was up by now. 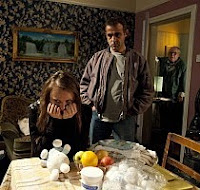 How fast was that DNA test? He took the sample one evening and had the results back before end of business the next day. That's just not possible. They take weeks! He is such an arrogant SOB isn't he? He had to know but still had the nerve to whine about HIS son being brought up by someone else right under his nose. Kevin couldn't wait to tell Molly and it's broken her heart.  And Jack Sr.'s unfortunately, he's overheard the lot. This could quite literally kill him in his state.

Now, I'll be here next Sunday but then I'm on my  holidays. During the first two weeks of September, leading up to the tram crash, i know, it's bad timing Corrie wise and I'll have a bunch of really great blog posts scheduled to be published so please do keep checking back daily. If I get a chance before my holidays, I'll do up some quicker summaries and schedule them to be posted on Sunday. The Weekly awards are also already prescheduled since they were originally posted on the Coronation Street Blog in November and December last year.
Posted by Tvor at 10:16

If you cant dvr the shows I see they are on the cbc website :O) you can watch them online :O)

Oh i'll definitely have the dvr recording so i can catch up but i may not take the time to write notes and post them so far after the air date.

I agree about Claire taking the boys - especially Josh. He's not even hers.

The DNA test was stupid. He touched the rubber with his hands and wrapped it in a napkin. Can we say contamination?

Have a wonderful holiday TVOR!!