David is horrified that he could have epilepsy. I can't imagine what it might be like to have to face living on medication for the rest of your life to stop the effects of something like that. Anna was very sympathetic to Gail, probably the only one that's non-judgmental since everyone else on the street has seen a lot more of David's handiwork first hand. Tina is on a mission and is baying for David's blood and it doesn't matter if he's innocent but Graeme is more reasonable. Still, David is on bail and having to live with his Gran until the trial. But good heavens was that David thanking his mother and his gran with kisses???


Becky is getting more and more tied up in Kylie's business and has had to pretend to be Kylie to keep Social off her trail. Kylie got the letter and skipped town, convenient, that. But i wondered why, if the Social actually wanted to talk to Becky, they didn't say that on the phone when she called? Worked out because the Social worker wasn't the usual one who knew Kylie. Close call though. She was a friendly sort but a bit too "Too" if you know what i mean. They managed to squeak out of that predicament but the woman still wants to see Becky. Worry about that when you get there i guess. Maybe it'll be back to the original worker. 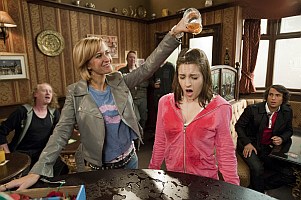 So she's back, with a Greek guy in tow. Why do people always think pouring a beer over someone is clever? Anyway, Kylie shows her non existent maternal instinct. She's off to Greece and knows darn well Becky won't want to let Max go and she doesn't want to take him anyway, selfish cow. What's her solution? Sell him for cash! I think Becky has filled that hole in her womb with Max. Kylie seemed to think going to Greece was a fresh start for her. It might be but it was not really well thought out. Well, you know what? Steve's fault. Offering to keep Max until she's got herself sorted and offered her a bit of emergency cash. That probably gave her the idea of asking for the big bucks/pounds. Becky doesn't see the problem. Steve does. But Becky is desperate and she's damaged and she doesn't want that for Max. If they turned Kylie into Social Services, couldn't they ask to have Max themselves as they're relatives? I thought the Social would allow the child to go with a relative if there was one available. 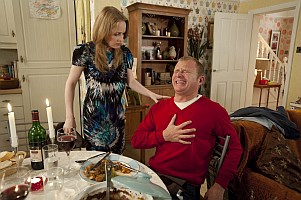 Ashley and Claire are still battling over Viva la France. Drunk wasn't enough, he ended up with angina. But Stephen Arnold is lousy at playing drunk, i gotta say. Way too OTT. Claire is sorry the boys are affected by their fighting. But she's not backing down either. Take a holiday to France first to see if we like it. What does it take? Ashley's brush with death aka "angina", or so Claire assumed, and he's milking it with all of that heart. Until of course, one of the boys got hold of the pills that Claire thought were actual heart pills instead of indigestion tablets. It made her see Ashley's point of view, though. Is she backing down? Is she heck. She's taking the boys and leaving him! What's wrong with that woman????? And, by the way, has anyone thought to remind her that she's not even Joshua's mother? I think the forgotten Doctor Matt might have something to say about his son being taken to a new country without his permission.


Ah yes. Chris really hasn't changed has he? He's ticked at Lloyd and already making threats. Looks like Steve and Becky had more fun in the park than the kids! And all that fresh air, with ciggies! Cheeky Jack smacking Michelle on the bum. These days that could be seen as harassment, I suppose, but this is just a soap so we should just put that aside.

Sally and Kevin were on the longest long weekend I've ever heard of. I guess Rosie managed to get the exact same wallpaper that doesn't look brand new and looks like it's been in a kitchen for a couple of years and everything. Yeah right. Laughed at Sally giving the baby to Kevin to hold while both he and Molly squirmed. Oh if she only knew! And while we're at it, Molly has become a thoroughly bitchy and nasty gob hasn't she?

Oh i do love Eddie. Taking flowers left at the factory in memoriam for someone and giving them to Anna without reading the card first! Marvellous! But who are the flowers for/about? Is it Tony? John sure freaked out over them because he knows there really is a body buried under the factory. And the next set of flowers spelled a C (for Colin, no doubt but everyone else thinks it's for Carla). So who's doing it?


The whole reason for that medieval weekend in a country house called Tatlock Towers that Mary was banging on about was because there was yet another spinoff DVD called A Knight's Tale, where Reg Holdsworth is the hotel manager, Curly Watts his boss and Rosie gets to be a serving wench and drags Jason along for some unfathomable reason. I've seen it. It's dreadful. Anyway, meanwhile, Tina practically blackmailed Norris for her job back, he was that anxious not to let Mary work there.
Posted by Tvor at 12:10

I've no doubt the spin off DVD is dreadful. I just watched Romanian Vacation. There's a hour or so of my life I'll never get back. Too bad it's so bad because it would be fun to see Red and Curly again.

I enjoyed Romanian Vacation. I did watch Knight's tale but i didn't buy it ;)) I"m very glad i didn't waste any money on it. I refuse even to write up a summary of it like i have the others.