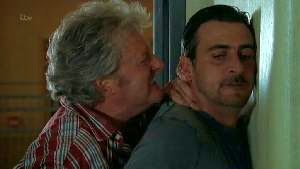 Ah yes, another month under our belts. I actually enjoyed the whole Fiz/Tyrone/Builders storyline. Good conflict, Nasty Todd, and I loved that it was the women that sorted it all out! Peter's prison storyline is moving along as well and I am enjoying the return of Big Jim. The chemistry is still crackling between he and Liz, don't you think? And with Steve (well, the actors, but you know what I mean).

Kylie's lurching from the frying pan into the fire, building that wall of bricks made of guilt. The embers should take flame in October. Peter's trial is in October, too and with any luck we'll see Rob's downfall. I can't wait to see what happens at the wedding! Kevin's back, Maddie's cleaned up nicely and there's a smart little spark between she and Tim, kind of kindred spirits maybe. Meanwhile, Mary's paddling furiously to keep Julie and Dev apart, that's going to be fun to watch.

All this and more over at State of the Street for September.