The Guilt of Rob Donovan 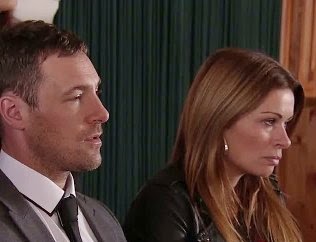 (This post was originally posted by Tvor on the Coronation Street Blog in September 2014.)

We all know Peter is innocent of Tina's murder and we all know he's guilty of a lot of other things, bad judgement being the worst thing. He's been on trial this week for murder. The question is whether the evidence was enough to convict beyond a reasonable doubt or not. This is a soap and the innocent don't usually get convicted unless their freedom will shortly be given to them once the real culprit, Rob Donovan, is revealed.

I have no idea what the verdict will be. The spoilers are vague and give nothing away so far so as I write this, I'm in the dark as much as you all are. We know Rob is the real villain of the piece and we know he's bricking it. If Peter gets set free, there will be more scrutiny into the case. The pressure on him will mount.

I do like that the defence brought up the fact that the prosecution accused Peter of hiding the bloody bracelet in the outdoor loo, (which is accessible to anyone) but that the murder weapon has not been found and if he'd been hiding it under his jacket, why was there no trace of blood on his clothing? Excellent point. We know Deirdre washed the bracelet after the dog found it so any further prints on it shouldn't be admissible in evidence but Deirdre hasn't given that testimony nor must she have mentioned it in a statement. It probably didn't even occur to her. If Peter is set free, and the prosecution re-focuses on Number 1, who else lives there? One convicted (and released) murderer. Check. Another who's been in prison for robbery. Check. And one more who's been convicted and freed from fraud charges. Check. There's a lot of "previous" there and Rob knows it.

What will happen? There's a 50/50 chance Peter will be convicted or set free but then what? Rob's near-violent reaction to Carla's testimony that showed Peter in a more favourable light has raised a few alarms in her opinion, I think. I believe she will figure it out or find out somehow. If Peter is convicted, Carla would not want an innocent man to go down for a murder he didn't commit, even if she has finished with him. Rob would no doubt try to convince her to keep quiet and play the family guilt card but I don't think she'd hold out. Therefore, I'm going out on a limb and speculating that Peter won't be convicted. When Carla then finds out, there might be more of a chance she won't go to the police, not straight away. I think she'll try to persuade Rob to turn himself in but of course, he won't.

What I'd really like to have happen, and this is probably wishful thinking, is that Carla stands up at Rob and Tracy's wedding and outs him as the killer and Tracy's fairytale day will be ruined. I may be asking too much, here! I do think it's safe to say that if the wedding does happen, the marriage will not be all that much longer than hers to Steve which only lasted a few hours.

Rob will go down for it, it's a matter of how and when. I think the wedding will be the day it all happens but I don't really know if Carla will out Rob or if the pressure that Carla puts on him makes him admit it to Tracy himself or if Tracy will connect the dots as well. Maybe she will and then dump him at the altar? (Isn't speculation fun?) What do you think? How will Rob get nicked?

It's a shame we're losing Marc Bayliss. I have enjoyed his portrayal of Rob and I've really liked the brother-sister dynamic they've built with Rob and Carla.