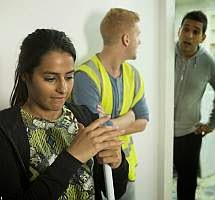 The week starts off with a Muslim celebration, Eid, wherein hearts and homes are opened to all. Except Leanne. Zeedan's heart is definitely not open to her! Yasmeen has been cooking since Thursday but when Sharif hears that she told Emily the new community centre would not welcome seniors, he marched her right over with flowers for peace talks, Emily accepted and accepted the invitation to the banquet though Norris complained about spicy food. He's so ungracious! Gary and Alya are flirting like mad and kissed and you knew that was coming! Now she's backing off and he can't understand why, if her dad is dating a non-Muslim, why can't they get together? Fair question but perhaps she's just not ready for the conflict.

Did Gary really bring a big bottle of booze to a Muslim household or was it something non-alcoholic? No, maybe he did say it was pop, I think. And Leanne did stay away, Kal made an excuse but his mother suspected Zeedan had something to do with it. It sounds like Yasmeen is even feeling a bit kinder about Leanne. I guess they can only have one person hating Leanne at a time and the baton has been passed to Zeedan.

Working on gutting the butcher shop seems to be a family endeavor with Jason and Gary doing the building honours. No doubt they'll have it renovated in record time just like when Jason and Tony had the gym ready for business in 10 minutes. Loved Jason remembering Fred Elliott, I say, Fred Elliott. 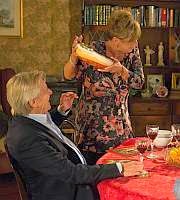 Peter's trial is coming up next week. Peter seems to be feeling a bit positive. Roy's been called as a prosecution witness and fears that his words will be twisted. Ken insists their friendship will be strong enough to overlook it but Deirdre isn't handling any of this well. She's finding all the trial talk grinding on her last nerve so they agreed, no trial talk just for today. That lasted 5 minutes and ended up with trifle all over the wall when Tracy and Carla started arguing about Peter. I don't blame Carla for not wanting to talk to him, it's self preservation but she's in enemy territory in the middle of Team Peter. It was bound to be tricky.

Peter's still in love with Carla. He's still rubbing Jim up the wrong way and in the next minute he's asking for favours and if he gets convicted, Jim is going to feel he's got free reign.

Now Deirdre is going to skip the trial altogether, but probably that's best considering how overwrought she is. Tracy insists Rob come to the trial to show support. I don't think Peter would see it that way, I think he'd see it as mocking him! Rob wants Carla to be his "best man" and she said yes as long as she got to see Tracy's reaction. Which she did by making sure she brought it up in the shop. And she gets to do a speech which is probaby scaring Tracy even more!

Meanwhile, Liz and Tony officially love each other but she lies to him and says she's meeting a friend when she's really going to see Jim at the prison. Sean lets the cat out of the bag and Tony gets all macho and gives her an ultimatum. Don't go in or we're finished. Liz won't be ordered about by any man, we all know that and with her high heels stuck firmly in, goes to see Jim anyway. 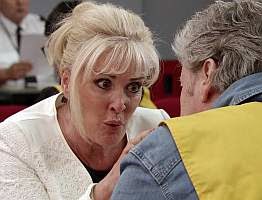 And took out her bad mood on Jim and he knew exactly why she was in a bad mood. Knows her well. But she still told him where things stand and put her own foot down. Tony broke up with her for lying and Liz let him go, pasted a smile on her face like all good Landladies do, and went forth into the fray except that demeanor didn't go too far, she exploded at Ken and Deirdre.

Never mind that. She says she doesn't want to get involved with anyone else but then she's tarting up for a night out in the clubs and dragged herself out of bed the next morning hungover.

Meanwhile, Steve is obsessing over a mole. And he is right to get it checked out but for heavens' sake go do it, don't just go on and on about it. If you're that worried, see a doctor, don't bore everyone to tears talk about it constantly. He finally did, the moles are just moles, but there's something else isn't there? He finally admits he's not feeling well, not sleeping, distracted, obsessions. You forget how good Simon Gregson is, with Steve usually playing the fool. The doctor suggests a councillor. Steve doesn't think it's depression because people think depression means you feel sad all the time and it's not like that.

Maddie is mithering Tim now that she knows he can't read very well. She really thinks he should get some help, adult literacy classes or something but he's far too embarassed. Anyone want to bet she'll be the one that teaches him on the sly? Well, in any case, and Maddie should know better by now, she had to talk to Tim about the adult literacy thing *in front of Norris* She might not have mentioned it specifically but it's probably enough to tweak his curiosity. I really like the dynamic between Maddie and Tim. 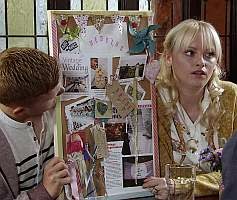 Kirk and Beth are working all the hours they can to pay for the wedding but Beth isn't willing to give up yet. Looks like Kirk is about to throw in the towel. He's even sleeping on the floor in full clothing! Sinead and Chesney are offering to do the wedding for them and they'll make it special. So Michelle is out and Liz agreed with Beth and Kirk. Not very supportive. Michelle was being rude about spending all that time for nothing. It's ok to be annoyed but a wedding planner doesn't want to get a reputation for being rude. I don't think she's cut out for this. Meanwhile, Tracy is running her ragged!

Kylie promises Eva that she's not going to go back looking for Callum again but what are the chances that will happen? The first bad day and she'll be running for whatever she can get her hands on now that David's locked the ADHD meds away. It seems like David is over the worst of his anger over catching her with the meds and has gone back to being concerned. Maybe. Well, he's even taking family photos so he must be willing to move forward.

Kylie wants to escape her life in the form of a family day out. Today. David points out all their responsibilities, they can do it on the weekend. Talk about taking the wind out of their sails. It sent her right back to Callum and this time for more nefarious reasons. She's after drugs. It's painful watching her slide down the slippery slope, isn't it? You just want to shake and and say "what are you thinking!!!" David knows there's something wrong and she won't open up to him. Audrey really does try to support Kylie and I think she can see a lot of herself in Kylie.