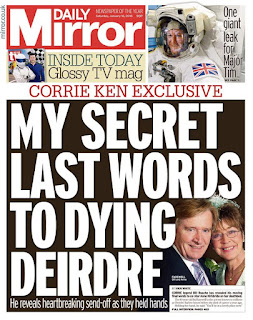 In an interview with The Mirror, Bill Roache reveals that he wants to find love again - both on and off screen.  The interview made front page news of the paper at the weekend and we have already written about Bill's last words to Anne Kirkbride who passed away on January 19th 2015. You can read that here.

Bill also says he’s ­determined to still be on the cobbles when he turns 100. But he does admit he once considered it.leaving the show.

“I thought about leaving when I was about 40,” he said. “I got a bit worried. There was a time when they tried to turn Ken nerdy, and I went to see the producer. But I haven’t considered it since.”

Speaking about Ken's future on the show, Bill says:  “I can’t say what happens with Audrey, but it’s looking good.”