The misleading ins and outs of Weatherfield buildings 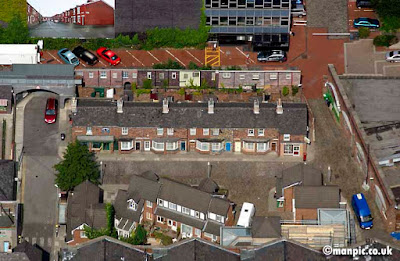 (This post was originally posted by Michael Adams on the Coronation Street Blog in January 2016.)

There's one thing about television soap operas that really bugs me. Whether it be Coronation Street, EastEnders or Emmerdale, they're all guilty of having incorrectly proportioned buildings. I've been inspired to write this post all about those annoying extra rooms or random changes in Weatherfield's properties.

The Rovers
Probably the most obvious of all inaccuracies in our most favourite pub is the interior downstairs extension that sprouts out the left side and into Rosamund Street - but isn't visible on the exterior street. From the show's early days through to The Great Fire of '86, the Rovers had a number of extra rooms, including snug and performance room (the select) which ran downwards from the left of the bar. In theory, these rooms were parallel with the considerably sized back room and kitchen, though since the bar is now a more believable size and the other rooms are gone, the back rooms stick out like a sore thumb.

In the opposite direction, the loos. Although the alleyway in between the Inn and No. 1 allows for some extra room, technically poor Ken should be having to put up with the ladies and gents in his backroom. As for the changes that appear overnight, the most obvious ones are those pesky stairs which changed after the fire and that extra window on the exterior that appeared suddenly in 2014. There was also an upstairs living area which was seen for some time, though hasn't been seen or heard of since the end of the 00's.

Rosamund Street
If you follow me on Twitter, you may have seen earlier today that I tweeted about my favourite episode ever. It's the one from Christmas 1998 and Alec Gilroy is trying to throw the Duckworth's out of the pub, but with little luck. One shot in the episode is of Janice and Les Battersby staring up towards the Rovers bedroom window, and in the back you can see the bookie's (now the florist) and the medical centre. Back then, the entrance to the flat above (currently occupied by the Windasses) was on Victoria Street.

Suddenly in 2007, the entrance to the flat was moved onto Rosamund Street though the layout of the flat above didn't change. Surely moving the staircase from one side of the building to another would cause some sort of structural interior change?


No. 4 Coronation Street — the Metcalfes
From one side of the room to another: the staircase. Contrary to what is said online, the stairs in number 4 did not change after the events of the Peacock's fire, but infact just before. It was a stupid mistake that should of happened when the interior of the house was redecorated and remodelled following the fire. Personally, I believe the change happened so that it was easier to film from the 'fourth wall' perspective, though watching old episodes makes the house unrecognisable compared to today.

No. 13 Coronation Street — the Ogdens
I'm concluding my article with a look back to an episode from the 1970s when the sets were brown, dire and boring in appearance. Though a door at the bottom left of the stairs is evident in quite a few episodes, which would surely lead into the corner shop. Also, in one particular episode, the stairs had moved to the other side of the hallway (where the door to the frontroom would be) and Stan walked down them into the backroom. Obviously the attention to detail wasn't quite as vigilant as it is nowadays (though perhaps this blog post from November can prove me otherwise!).

Do you have any niggles about the various shapes and sizes of Weatherfield? Perhaps you've noticed something I haven't? Let me know!