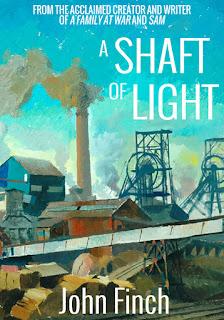 In 2009 we interviewed John for the Coronation Street Blog and you can read it here.

John has now released a new book. The novel A SHAFT OF LIGHT  follows the fortunes of a group of young people growing up in a Yorkshire mining village in the 1930s.

John Finch has created and written many of television's most popular dramas, including the classic Granada TV series SAM, which starred TAGGART'S Mark McManus. He was the first trainee writer on CORONATION STREET, starting with episode 24, and later became editor and producer. Other TV hits include A FAMILY AT WAR (Granada) and FLESH AND BLOOD (BBC). In the 1970s, John's programmes had audiences exceeding 25 million and frequently beat CORONATION STREET and MORECAMBE AND WISE at the top of the television ratings.

In A SHAFT OF LIGHT Denis and Ted are best friends, but in some ways their lives are world's apart. For shopkeeper’s son Denis, the advent of war shows him the possibilities of a life far from all he knows. Yet Ted, from the poorest part of the village, dreams only of becoming a man and starting to work down the pit, like his father before him. Both boys are drawn to Jean, a spirited young woman from their village, but only one of them can win her heart.

John says: “I based A SHAFT OF LIGHT on the mining town of Featherstone, where I was brought up. After the miner's strikes Featherstone suffered more than most mining communities from the decline in the coal industry.”

A SHAFT OF LIGHT was originally published in hardback, to critical acclaim, as CUDDON RETURN. This new reissue is the first time that the novel has been made available as an ebook and in paperback.

You can buy it from Amazon here.