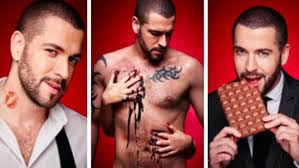 
Here is Coronation Street star Shayne Ward as you have never seen him before - drizzled in chocolate.

Shayne is challenging the nation to join him by giving up chocolate for a whole month as he fronts the British Heart Foundation’s DECHOX campaign.

The former X Factor winner gamely took part in a photoshoot for the campaign which saw him seated in front of platters of chocolates and smashing up Easter eggs. Shayne, from Clayton, also has chocolate painted on his torso and sauce poured over him in the fun photo shoot.

He said: “I didn’t think I was a chocoholic until I realised my occasional treat had become an everyday habit. The photoshoot was a lot of fun. I must admit I ate quite a lot of the chocolate props along the way! For self-confessed chocoholics like me, March is not going to be easy with Easter pending but the money raised will help the British Heart Foundation fund more research to help the millions of people fighting a daily battle with heart disease.”

The Manchester Evening News have a video you can watch too!