McDonald Family goes to Blackpool circa 2003 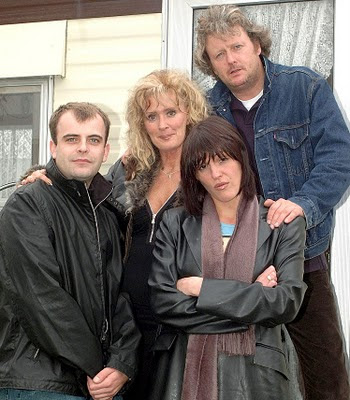 I thought you might enjoy this photo from the Wayback machine. It's November 2003. Steve and Karen have just got divorced and re-engaged because she wants to remarry in a big splashy ceremony (be careful what you wish for!) Tracy Barlow is pregnant but nobody yet knows that Steve is the father and has married Roy so that he has legal claim on the baby he thinks is his.

Meanwhile, Jim McDonald is still in prison for the manslaughter charge stemming from when he confessed to beating Jez Quigley who later died from his inuries. Liz had remarried Jim in prison and she's now working in a pub in Blackpool. Jim suspects that she's seeing another man and sends Steve up there to check on her. Karen goes along for the ride, anticipating having a bit of a lark on the promenade. Alas, Jim is impatient and breaks out of prison and most of the McDonalds are reunited.

You can read more about the Blackpool Shenanigans, which also include a return by Bet Lynch and a sub plot with Ashley and then-nanny Claire on holiday, and falling in love over here on Corrie.net (starting at November 17)

Great photo. Thanks for the memories.

I always like the McDonald family. I even remember Jim wearing a Toronto Blue Jays shirt at one time -- does anyone know how that came to be?

I think the actor that played Jim was in Canada once doing a play or something and picked up the shirt then.