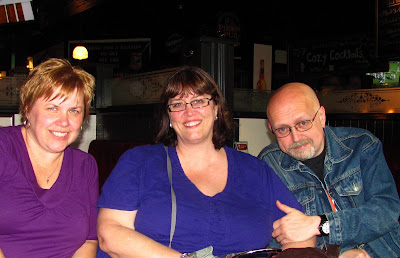 There's an online shop out of Ontario called Blighty's that carries food, candy and gifts from the U.K. They have real shops, too, called Blighty's Tuck Store and are found in the Greater Toronto Area. Luckily, if you don't live there, you can shop for your favourites online. They also carry a small  range of Coronation Street  gifts!

That's not the main reason for this blog post, however. Blighty's has a monthly newsletter that they send out and in this edition, found here online at their blog, there's an interview with Deborah Cyr. You may recall that Deborah won a contest that names her officially as Canada's Number One Corrie Fan. She won a trip to Manchester and to the set and met a number of Corrie actors. Regular fans of this blog may recall we interviewed Deborah after she won the contest and she also sent a great description of her trip to Manchester.

My fella and I had the pleasure of meeting Deborah face to face at a ping in Toronto in October 2010 and she's every bit as friendly and enthusiastic as she comes across in the interviews!

Thanks for blogging this Diane.

Thanks so much for the link to Blighty's! I've been looking high and low for just such a place in Canada.