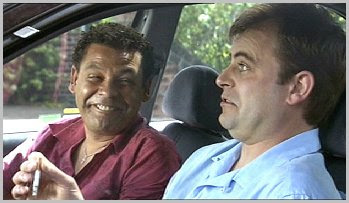 West Coast fans are in for a treat! There's going to be a big ping in Vancouver on Saturday, February 5th. Here's the press release from the publicist:

Hosted by Joe Leary and being held at the Kings Head Tavern, the Ping will take place on Saturday February 5th from 1:00 pm to 3:00 pm at 1618 Yew Street, Vancouver, BC. The Kings Head in Kits is an all ages pub so for those of you that aren't able to find a sitter for your kiddies, please feel free to bring them along! First pint is on us, there will be traditional British pub fare available for purchase, games, trivia contests, prizes (including autographed beer mats direct from the Rovers) and special guest Robert Lawrenson - who played PC Glaister on Coronation Street for several years - will be in attendance for Q&A with the audience. Admission is free, just bring your love of the Street and enjoy swapping stories and secrets with other Corrie fans.