Phew, Simon's ok! It's a bit far fetched that a 6 year old would be able to find his way back to Weatherfield overnight on a train or three all by himself, then getting through the city from the train station to Coronation Street alone, without anyone noticing at all but there you are. I'm surprised Peter didn't knock George right into Victoria Street when he came to grovel. He thinks Simon really is better off with Peter. Ya think? 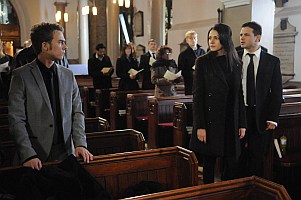 There can't be a funeral on the Street without some palaver can there? Not most of the time at least. Tina was the one making a scene this time, haranguing Gail about killing Joe. Good god could the scene with Gail coming downstairs to the Operatic aria be any more drama-queen? And Gail looking at Nick and fixing his tie, boy the Nick Sunshine sure shines out of his backside where she's concerned doesn't it? Tina's mother didn't come, something about not wanting to be a hypocrite. How about wanting to support your broken hearted daughter? And Why on earth would Gail be going on about Joe's depression at his funeral? Wouldn't there be a nicer way to remember him? Mind you it *was* all depression and addiction and loan sharks, i suppose. 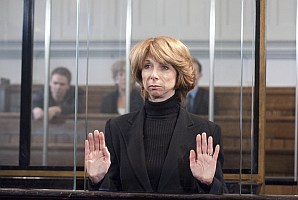 Surely there were more people attending the funeral that Graeme could have got a lift with? But no, hardly any neighbours there, even long term ones that have known Gail for years! Ok, the Barlows were otherwise occupied, but no Sally? Her best friend? Oh Joe we hardly knew ye! This is the third husband Gail's buried. Martin should think himself very lucky he escaped alive! Talk about the Black Widow!

So even though the police admitted there wasn't enough to charge Gail, they arrest her anyway because she's thinking of visiting Sarah in Milan. Tina blew it all out of proportion and nobody in their right mind thinks Gail could possibly kill anyone! Tina thinks Gail got her to lie to the police when Joe was already dead. Well she did but Gail didn't know Joe was dead! It's more damning circumstantial evidence.

So there's David on his own. However can he manage to survive without Gail? Pah. I agree with Nick, time he learned to look after himself and indeed i'm sure he can. Gail's charged with murder with family there to support her but tempers are hot and David and Tina get into a slanging match after Gail is denied bail. I guess we'll have to put up with Gail whispering "I didn't do it" a la Deirdre Rashid. Wouldn't it have been funny if her cellmate would have turned out to be Jackie Dobbs, banged up for something the minute she was chucked out of Tyrone's house? Gail was like a scared rabbit in the prison, though. Hiding away and then scurrying away from the other inmates who were giving the newbie a hard time.

Molly's pregnant! Not really surprised and naturally she's not going to know who the daddy is. I'd really like it to be Tyrone's but it wouldn't be nearly so dramatic would it? Kevin burning the scan photo was a bit mean, though as was telling her to get rid. If that didn't put her off him, and it didn't, i don't know what will. She's clearly delusional. Kevin had a wakeup call and it's not guilt. He's loved Sally for most of his adult life. Marraiges go a bit stale and he got infatuated. End of. Yet he keeps creeping around Molly even though he doesn't want to know. Creep is exactly the right word! So what's she going to do now? Three guesses. The first two don't count. Tyrone snapped up his chance, chucked out his mother, and took Molly in. She went. It was easier wasn't it?

Mary's on the competition trail again, and won a Bronte weekend in the countryside, almost hours after she entered! Who with i wonder???? Rita's back and looking very "well rested" i think the term is. Speculation has the actress having had a face lift with the switchover to HD broadcasting imminent in the UK at that time. If she has, the surgeon was very good. Now she's got to figure out what she wants to do and working with Emily isn't going to do the trick. She'll end up back in the Kabin sooner or later, rest assured, seeing as Mary wants to drag Norris away for a romantic weekend.

Oh Ace!!! David was watching a Bugs Bunny cartoon! I always wonder why Tyrone has to ask Kevin for time off for various reasons. He's half owner, he shouldn't have to ask permission!

Wasn't Nick a rat b@stard??? He shags Kelly, gets her to spy on the factory accounts for him and then sacks her because Carla says so. Carla doesn't trust her, of course, and if she was wise, she wouldn't trust him either. He's a spineless slimeball and this is just the beginning of it. Watch this space!

Surely Kelly could go to a tribunal for that? Oh i'd sue the lot of them until they had no skin left on their backsides. Yes, she was wrong to spy but he asked her to. I suppose she'd end up being torn apart at a tribunal and made to look the villain. Nick and Carla would gang up on her and lie probably but they treated her like dirt, i say. It's too bad none of her coworkers backed her up either but i don't suppose most of them liked her either. But didn't she tell them all what for before she left?

So that's the last of Kelly with the Legs. She wasn't really a very nice person most of the time but she did keep things interesting now and then. At least she walked out of Weatherfield, confident and looking to her future. And you know? She just might do ok for herself.
Posted by Tvor at 07:01